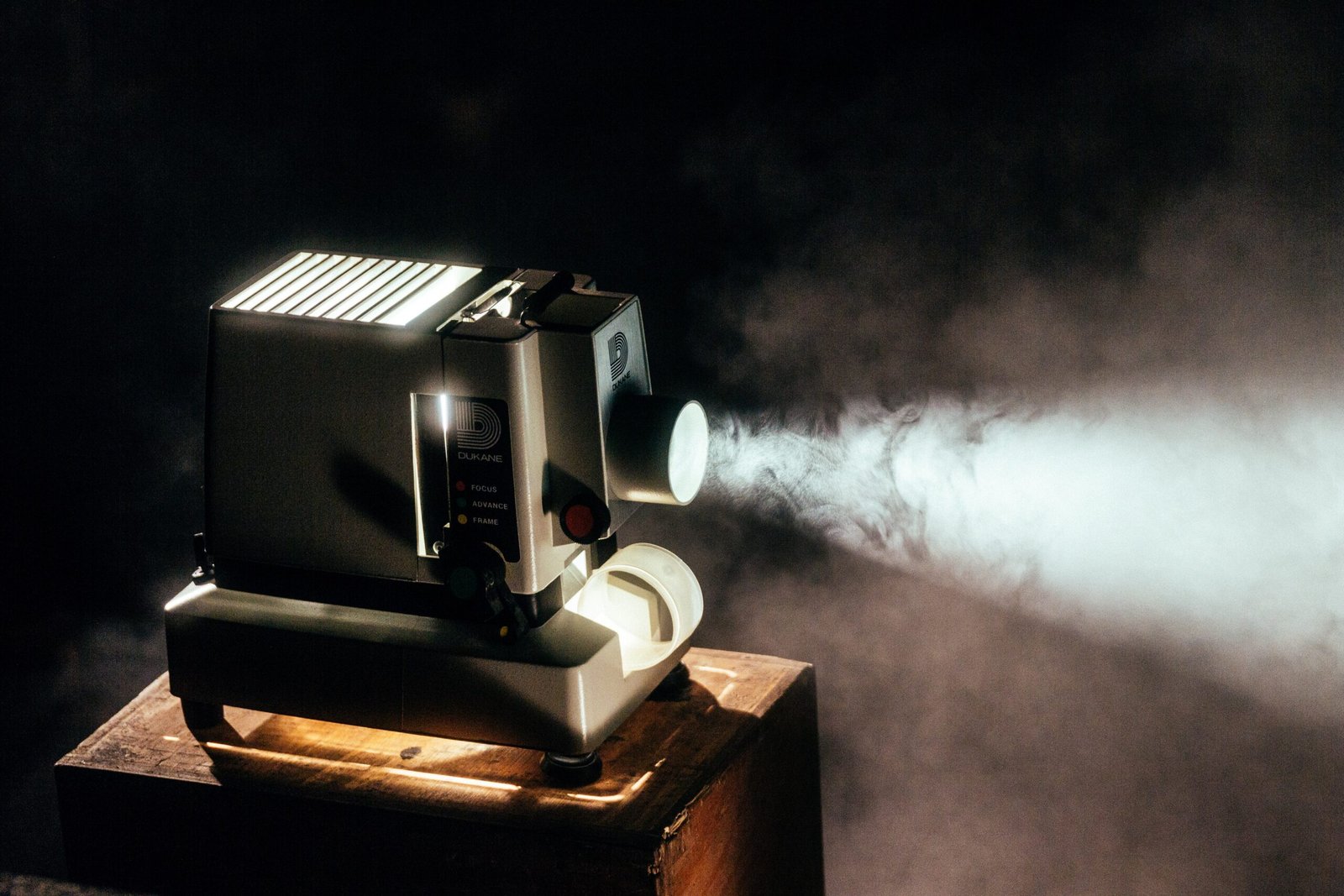 Are you a movie fan? Especially love those action ones? Did you know that many foreign films have been filmed in Morocco?

December 2021 the medina of Fes was buzzing with the filming of the new Indiana Jones movie – number 5. (And yes, Harrison Ford was there!)

Little known fact – the movie Casablanca was actually not filmed in Morocco (though there is a café in Casablanca which has taken up the theme). It was filmed entirely on sets in Las Angeles. But there is a café in Tangier which makes me think of it, with its art deco style and old world charm (check it out below at number 1)

And of course, for Game of Thrones fans, there were scenes filmed in Essaouira on the Atlantic coast south of Casablanca, and in Ait Ben-houdda near Marrakech.

But this is about the locations used in Tangier, of movies filmed here. If you are a movie buff, what better way to spend a day than to check them out!!!

Here are five spots in Tangier you can explore, that were used in movies you may have watched. 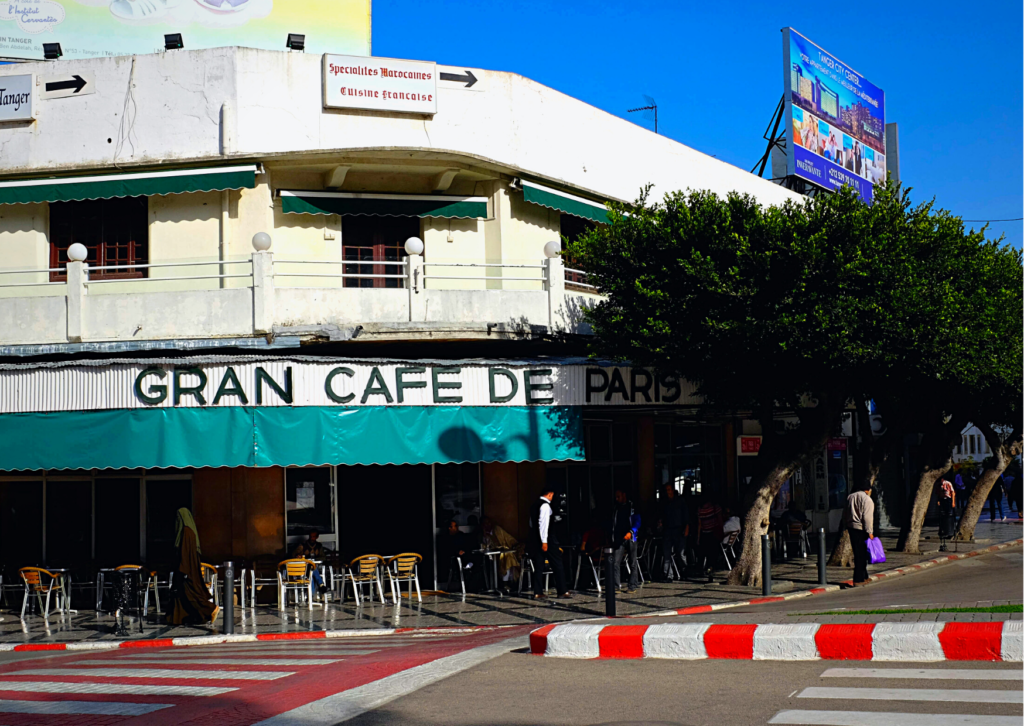 Let’s start here, at Place de France where the French embassy is located, right next to the cannons with a view of Spain (my favourite spot in Tangier).

As I said, the inside of Gran Café de Paris reminds me of the movie Casablanca, which was incidentally not filmed here, but entirely on sets in Los Angeles. But it is a nice place to sit, with its 1930s art deco style. Have a drink – maybe some Moroccan mint tea, some breakfast of omelette or khlie – eggs in beef jerky which is a special of the old capital Fes. But don’t pull out your laptop or ask for wifi here – they have decided to keep to their era.

But I mostly choose to sit outside Moroccan style, on the street, back to the wall so I can watch life pass by – people, taxis and other traffic as they negotiate their way around the fountain in the centre of the road.

You may not recognize the location at first, but this was the setting of a major scene in the third Bourne movie, The Bourne Ultimatum (2007). Nicky Parsons (Julia Stiles) sits at a table waiting for Jason Bourne (Matt Damon) to appear. And of course things go wrong.

It might take you a little to recognize the scene. They use an angle that makes it look like a small café on a steep and narrow street, and they use film angles so as not to show the fountain. Impressive how much the angles can change the way a place looks!

Can you identify the features? 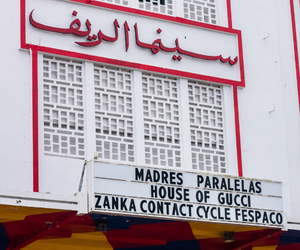 Now walk down towards the medina, through Grand Socco which you will recognise by the fountain and the landmark Cinema Rif, then into the medina, and stop near the top. Once inside and on the main street, the first gate on your right leads into a rabbit warren of shops.

This is Souq Barra – the main food market of the medina. Walk past little shops with more varieties of marinated olives than I have seen anywhere, spice shops, bread stands, vegetable vendors and little general stores. If you keep going you will see the chicken and meat shops, places to choose your sheep’s head or various delectable animal insides for your dinner, and finally the fish market.

Grand Socco is the Tangier locations used for Inception (2010), directed by Christopher Nolan and staring Leonardo DiCaprio amongst some other big stars. 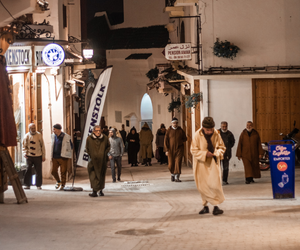 Up towards the top of the medina and near the Kasbah for a spot of lunch and a 007 location. This restaurant inside the old walled medina was used for the filming of Spectre (2015), as well as the restaurant Poisson (at the top of the steps half way between Gran Café de Paris and Souq Barra). Do you recognize the locations frequented by big time English actor Daniel Craig on the run.

To top off an excellent morning (or an excellent day), check out Blue Door Cuisine (bluedoorcuisine.com) for a food event. On your way back down the hill from the kasbah they have a welcoming space in their home for you to learn how to cook your own Moroccan food to complete your food experiences, with the best of the food Morocco has to offer – because the best food is found in the kitchens and homes! Blue Door Cuisine brings this to you, with the added bonus that you can take it back home with you to impress your friends and remember your trip. 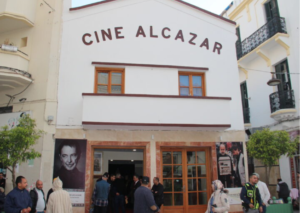 Now for a quiet glass of mint tea, or a coffee served in a glass Moroccan style, sit in front of the Cinema Alcazar, and take part again in perhaps Morocco’s biggest pastime – watching life pass by over a drink.

Paul Bowles is not a well-known name in the west, but in Tangier he has become part of history – a local icon best discovered by reading one of his books, or a visit to the American Legation museum in the medina. Not only a writer who lived in Tangier for many years (from 1947 until his death in 1999), but he also collected and documented a lot of local music, which has been preserved.

His best-known book is called The Sheltering Sky, which was made into a movie in 1990 with John Malkovic. (His photo is one in the El El Minzah hotel near Café de Paris, where a parade of famous stars, designers and others passed through, their photos now decorating the inner courtyard of this beautiful riad hotel).

If instead of the street seating you decide to sit inside Café Colon, you will recognize the final scene of the movie which includes a tram passing on the street outside. 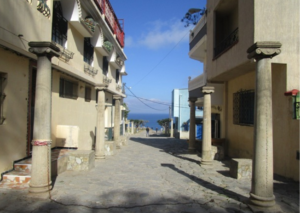 If you are up for a bit of an adventure, just outside Tangier is the location of some of Men in Black: International (2019), the latest MiB movie, this one starring Australian Chris Hemsworth of Thor fame. (Throw in the delightful Emma Thomson and enigmatic Liam Neeson). Here they shot a huge scene, including a big alien fight scene.

Head out here, and enjoy some of Tangier’s nature. It’s near Rmilat forest which is a calm spot for chilling and re-energizing. Enjoy the forest walks, or head to the coast cliffs where you can take in the sea and views of Spain.

If you time it just right, you might even catch a sunset!!! 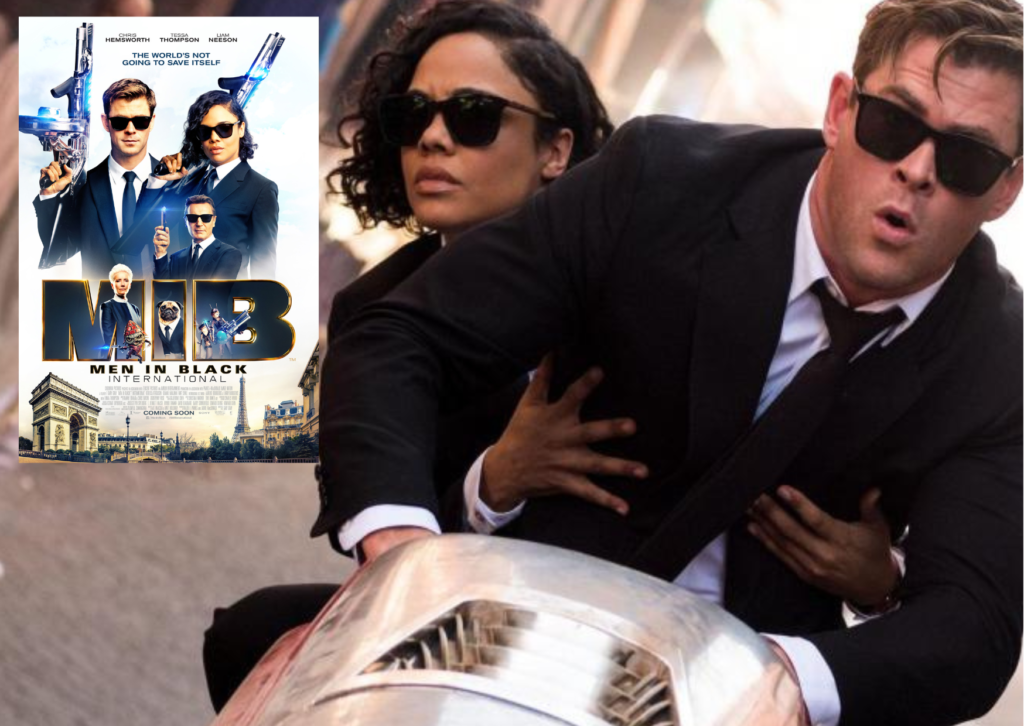 As a bonus, not from any filming done in Morocco, but if you’re a fan of the series Friends, you can visit the Central Perk Café. It’s just south of Cervantes and the Spanish embassy, only a few minutes’ taxi ride. They have gone all out with their effects, using classic signs of the series throughout the café.

If you go on a Friday night after 8pm you can probably catch a live music band for the evening, and with any luck, even some local gnawa music.

So even if you’re not a movie fan, there are 6 places well worth your visit in Tangier. Surely a perfect way to spend a day! 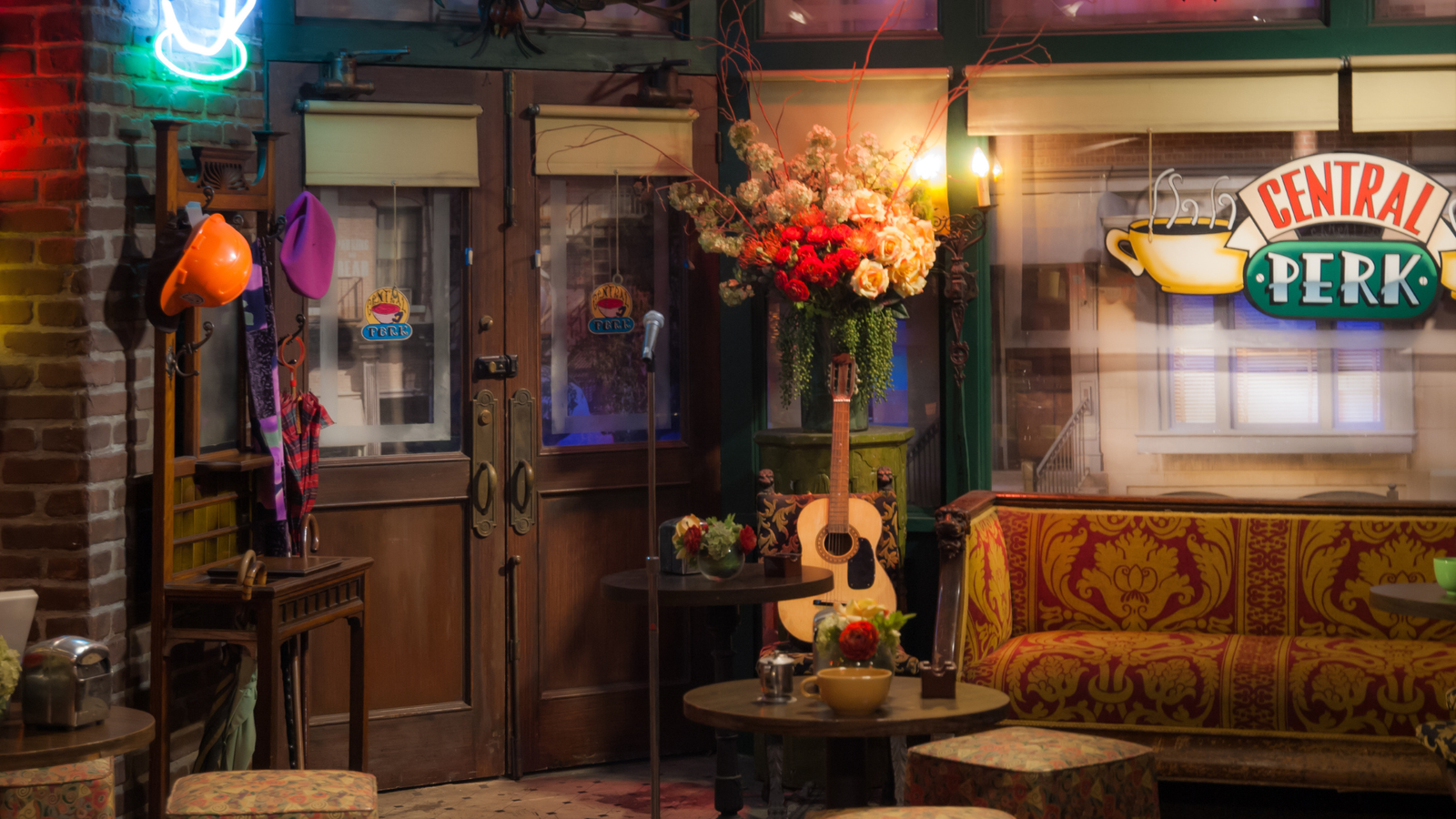 3 Thoughts on “5.movie locations in Tangier”