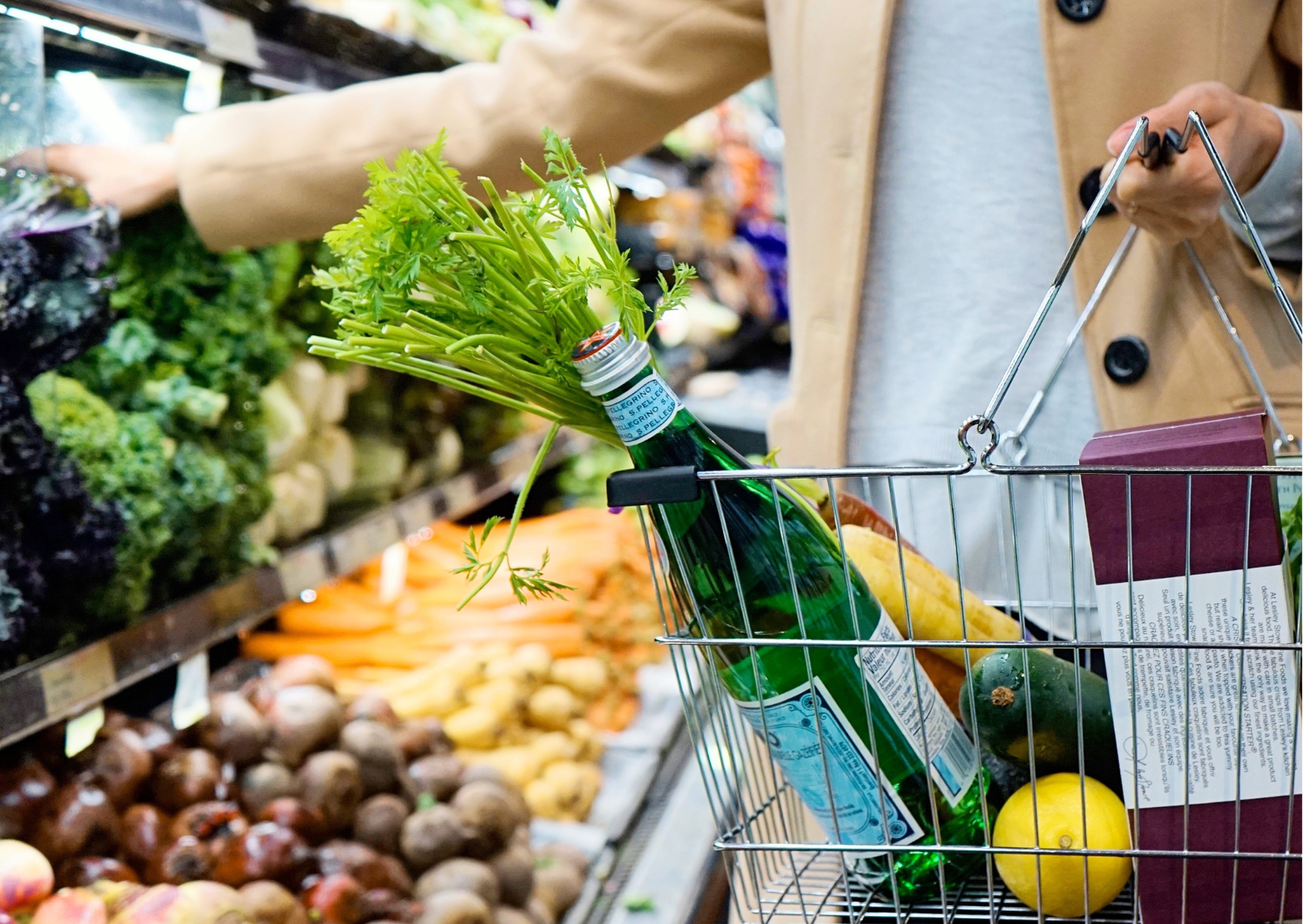 Have you ever taken a shopping tour? Be ready to be surprised! In Morocco it will not be what you expect.

Someone once said to me, if you want to get a feel for a country, even if your visit is very brief, go into a supermarket. I’ve had longer stays in most of the places I’ve been to, and I have always made a point of doing this.

The local supermarket is a reflection of the food and shopping habits, and something we’re familiar with from home so we already have a ready baseline. What are the biggest areas? What’s done differently with packaging and products? And at least a wander around and wonder at what might be in some of the bags and bottles with strange writing on them.

China had a huge fresh green vegetables section which I could always smell from the doorway. Mongolia’s shelves were mostly empty. In Japan I always wondered whether the “Daily Foods” section above all the cold smallgoods like butter, cheese and milk was a curious label or a miss-spelling – since they have trouble distinguishing between “l” and “r”. 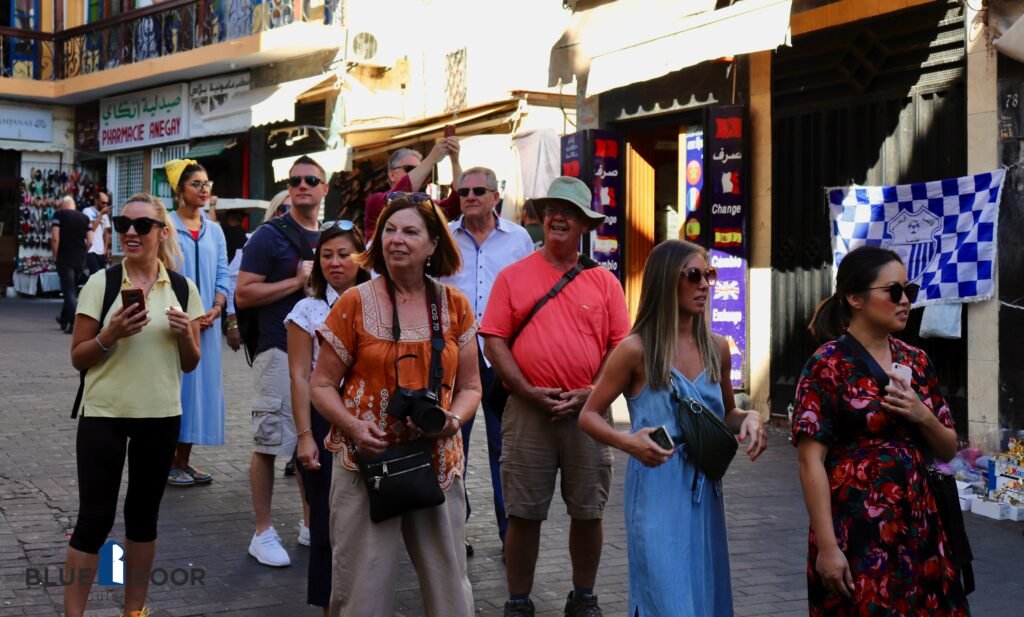 But what about Morocco? Here it works differently.

When I first arrived I used the supermarkets exclusively – Carrefour and Marjane. The small vegetable shops I saw around were just too hard to get my head around. There were no prices. I didn’t know how much things would be and was worried about whether I’d be given a fair price or a foreign price. Asking how much seemed too hard with no common language to work with. So I avoided them completely.

But the supermarkets will give you little idea of how the locals shop. They are used by the rich as a status symbol, and expats. They are expensive, full of luxury items that are typically not part of everyday Moroccan food, and the quality of the vegetables is usually not good. Now, I hate using them.

So as a visitor wanting to check out the local “supermarket”, how in Morocco do you go about doing that?

To tell you the truth, I’m still learning new things about shopping in Morocco. It’s nothing like I’ve ever been used to – though I’m always tickled at the thought that I think this is the way it used to be, before we had supermarket chains, shopping malls and cars to take us further afield easily.

So here is “a day doing the shopping” – a tour, if you like, of how the locals do it. 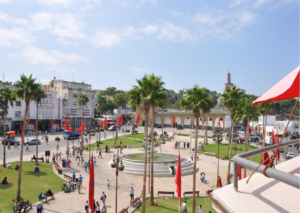 Let’s start from Grand Socco – that’s the fountain and big roundabout in front of Cinema Rif. With your back to the cinema, there are two big entry ways in front of you on the other side of the fountain. The left one is an arch which leads into Rue d’Italie – it runs down then up again all along the outside of the old wall. At the top is the kasbah – the old castle, and its museum.

The one on its right doesn’t look as fancy since it doesn’t have an archway, but it leads down into the ancient medina (town centre) and Petit Socco – you may have been to Café Grand Centrale there, not a bad place for breakfast or a drink.

We will take that street, but not very far. There is a double archway on your left which leads back out onto Rue d’Italie. Just before it on your right is a little shop you probably didn’t notice. Check it out.

This is probably the closest thing to a local supermarket in Morocco. (I’d have called it a corner shop, but unlike at home they’re not expensive – their prices are all normal).

These little shops are everywhere, in all shapes and sizes. This particular one is quite large. But have a look around – it is jammed with all sorts of things. There will be pasta, rice, and lentils etc. in bins, eggs near the counter at about 1 dirham each (.10c), and packets of all sorts of things.

Many of these shops are very small, and it always makes me wonder how they decide what they’re going to stock. In fact, their products change a bit over time and none of them have everything. Over time you learn that this one has pasta but not pasta sauce, that one has only one type of rice but another has several.

Now go back to the main street of the ancient medina and take the next big archway, this time on your right. This is called Souq Barra – the main market of the medina. (If you wander through the medina beyond the touristy streets, you’ll find little shops and markets everywhere. But this is the big one, the marketplace.)

At the entrance there are some vegetables. But wander through and walk all the way down. 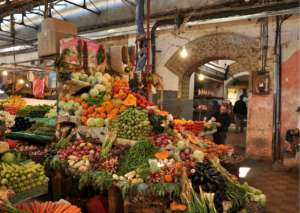 You will walk past olive shops, dried pasta shops, some spices, vegetables. Then you’ll come to the chicken shops, the meat shops, the insides shops (insides of animals, that is – I’ve now eaten things which I don’t even know what they are or what they’re for). And finally, the fish market at the end (take care not to slip – the floor there can get very slippery).

There are also a myriad of people selling stuff as you go – the lady with the lben (sour milk, or butter milk) and white Moroccan cheese (a lot like cottage cheese or ricotta), the bread sellers, someone with parsley and coriander, or just selling bags of garlic for example. 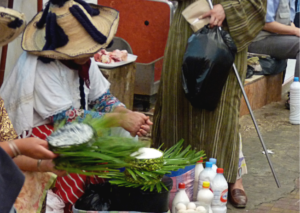 And don’t be shy about checking out those alleyways which look like they go nowhere. I am still discovering that they almost always do. And since it’s nothing like home, that gets me curious. That’s where you might find a little food shop – there is one, down near the fish markets, which is an excellent little eat place. What’s more, it will be very cheap.

Some of these tiny food places sell just one thing – harira soup with bread and pickles. If you’re thirsty, there’s a cup next to water in the middle somewhere for everyone to use, if you want a taste of the local flavour, the backbones and lifeblood of Morocco.

Once out through the fish market you have choices. Walk back up to Grand Socco to your right and you’ll go past a bunch of spice shops – way fresher than anything you’ll get packaged in your supermarket at home. The spices are piled high in pyramids of colour, and sold by weight. 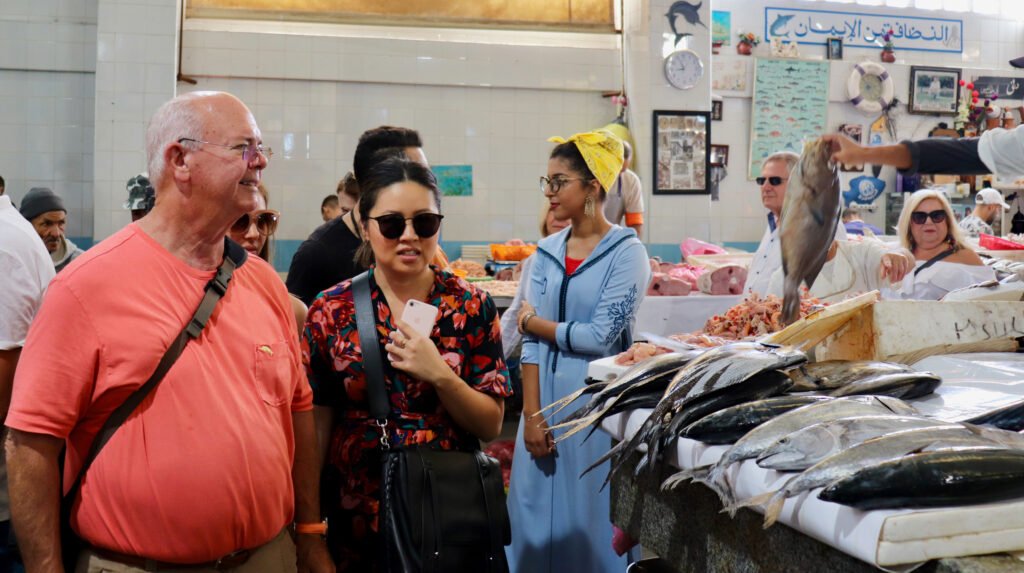 If you instead go to your left, then take the next street to your right. A vegetable shop just before that street will lead through another market, mostly of vegetables. At the corner of the street are some kitchenware supply shops, and shops for flipflops and slippers.

Walking up that street which comes to a set of steps at the top, again, don’t be shy. Many of the little shops are just an entranceway to a maze of more shops. On your left there is an old foundooq which is now a maze of little shops. And even upstairs – they may look like they are leading to private apartments, but there’s a carpet and material area.

A foundooq used to be an inn for travellers and tradesmen. They had a big open courtyard in the centre for the camels and horses, and two floors with a balcony and rooms. You will find them everywhere in Marakech. But even in Tangier they are still around – it’s just hard to recognize them.

The foundooq has kitchenware, linen, underwear, and the general stores.

As you see, shopping is about learning where to go to find things. Mostly shops selling the same items will congregate in an area together, which helps in knowing where to go.

The fruit and vegetables are fresh and good quality. Mostly they will give you the price – not an inflated foreigner one. Just check the price at a couple of shops and you can be sure.

But the biggest pointer I can give you is to go into the shops and check them out. Go up the stairs, or down them, or behind them, just to see what’s there.

I was told by so many that for clothing I should go to Rue de Mexique – the next street up above Café de Paris. I walked along that street many, many times, including a particular shoe shop which I never went into because I wasn’t looking for jogging shoes. I had no success finding the clothes I was told were there.

Eventually I went with a friend, who took me into that shoe shop selling joggers. To my shock I discovered that the back of the shop is the start of an underground maze of shops – dozens and dozens of clothing shops spreading beneath two full city blocks!

So if you want to find out how the locals shop in Morocco, don’t be shy. Check out those little shops which look like they go nowhere. Here it is such a mecca if you like to explore.

I am still making new discoveries. 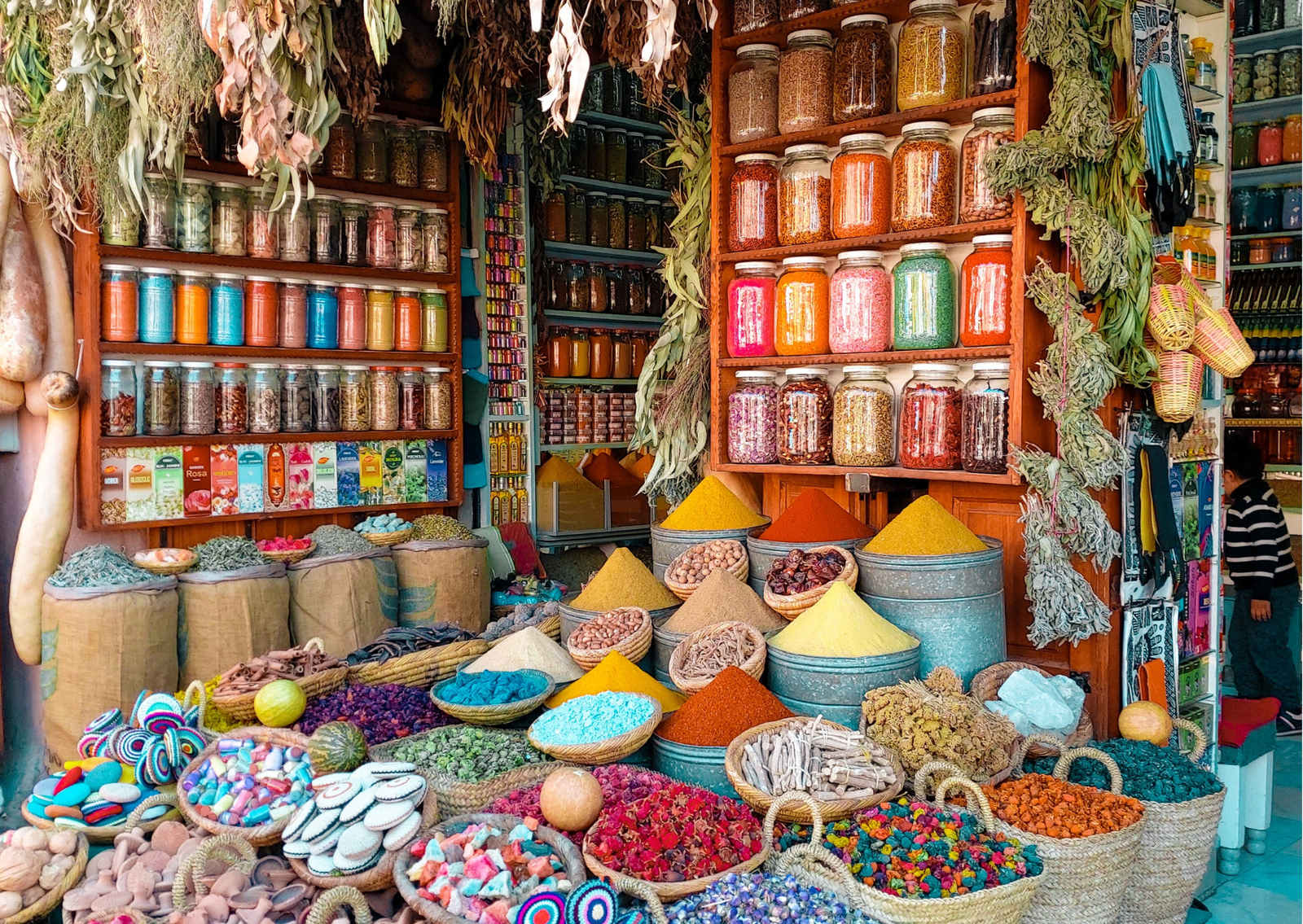