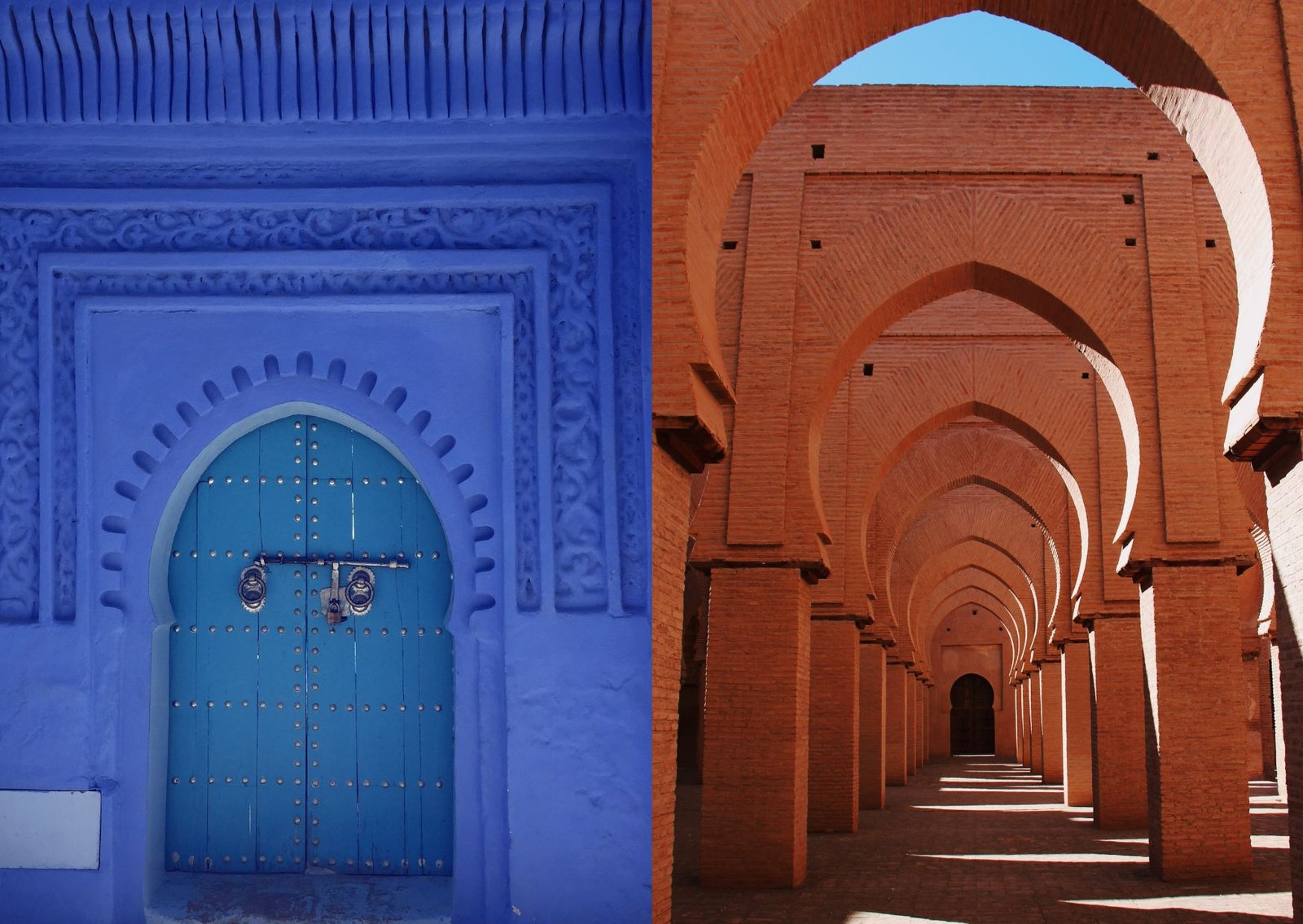 There is a purpose for the world not to be just in black and white. Marrakech and Chefchaoun are living proof of that. As you go around Morocco, these two cities have a unique charm, incomparable to all the others. Both are aesthetically eye-pleasing and delightful. Yet, one is way different from the other, Marrakech is lively and vibrant while Chefchaoun gives more of a peaceful and calm vibe. The two deliver different experiences, not one greater than the other. 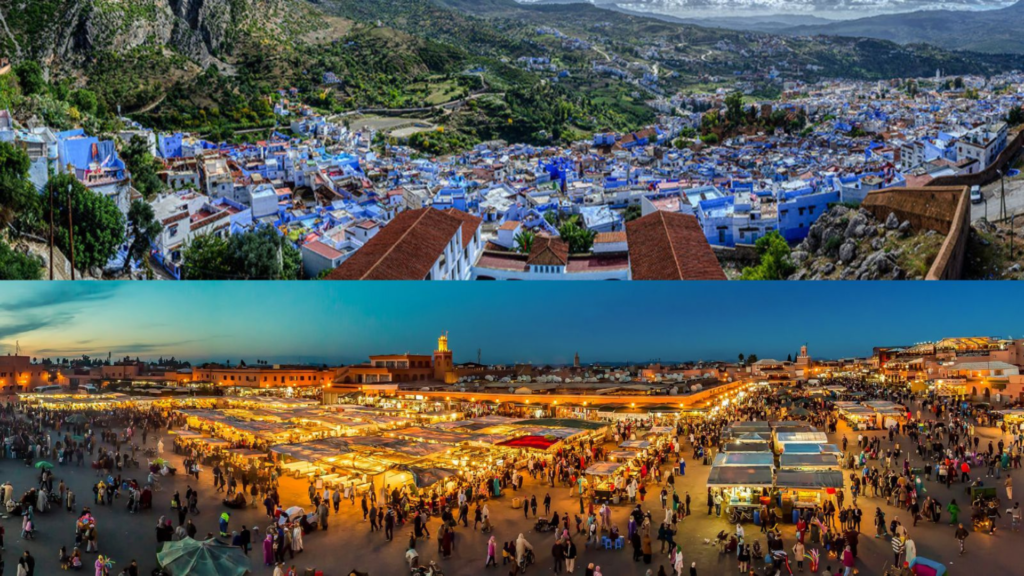 Have you ever thought about the reason why Marrakech is Red while Chefchaouen is blue?

In terms of the psyche, the colour blue is known to impact the mind positively. Blue represents patience and understanding, which is why we feel so comfortable around it. When overwhelming emotions consume us, we’re encouraged to decompress with this colour. While the colour red is a warm and positive colour associated with our most physical needs and our will to survive. It is energizing, red excites emotions and motivates us to take action. It is also strong-willed and can give confidence to those who are shy or lacking in willpower. Most importantly, it is the most popular colour used on flags in the world, where Approximately 77% of all flags include red. 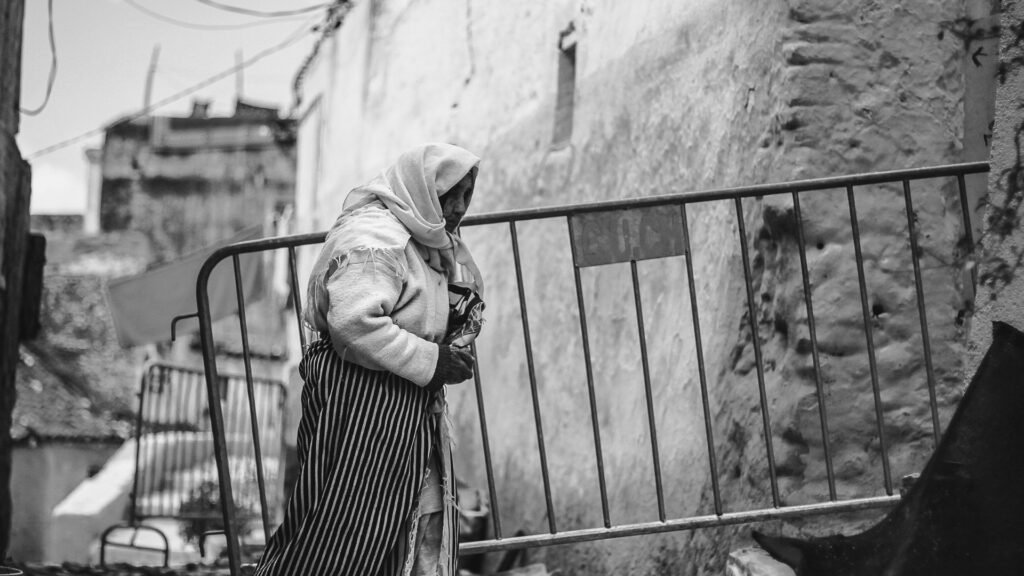 Let’s dig into the mystery behind painting the whole city with one colour. It all started in 1471 when a person called ‘’Moulay Ali Ben Moussa’’ founded the city of Chefchaouen which eventually became home to the Jews who escaped the Spanish inquizition in 1495. Nicknamed the “blue pearl of Morocco”, Chefchaouen is situated in the North part of the country at the very peak of a mountain. It’s about two hours south of the city of Tangier. The locals of the town get their drinking water from a waterfall called Ras el-Maa. They believe that the blue painting of the walls was done to always remind them that life-sustaining water allows them to survive in a hostile environment. Yet, the colour blue is also representative of the sky according to Jewish beliefs. Therefore, Jewish communities, paint things blue and use blue-coloured fabrics. Every single shade imaginable – sapphire, teal, turquoise, ultramarine, indigo, sky and cobalt blue covered the whole buildings, so painting houses became a tradition. It was only Jewish houses that were blue, but the Muslims adopted it purely for their appreciation of the colour blue from an aesthetic point of view and for its notable calming properties. Now, it’s just what everyone does, reflecting the idea that communities in Morocco like to show a united front. 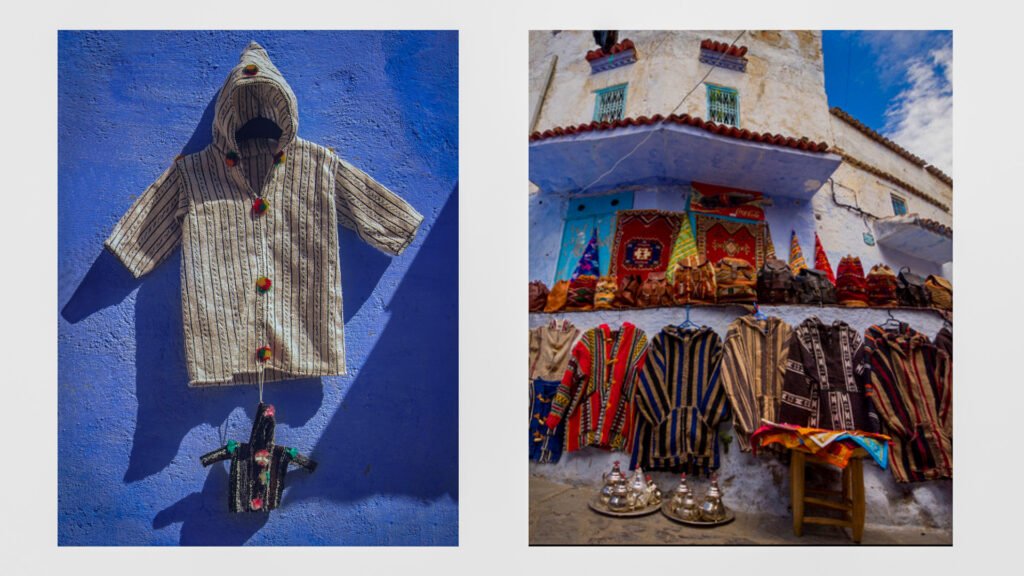 There is more to Chefchaouen than just blue houses. The town is famous for its thick woolen blankets and chunky hand-knitted socks, both of which make great souvenirs. Food lovers will also, love the soft creamy pats of goat’s cheese that are sold in the markets, and featured on the breakfast tables of all guesthouses. Chefchaouen is considered one of the safest cities in Morocco and an off-beaten path for tourists as it’s a perfect place to wander and take photos. It especially the right destination for solo travelers.

What is there to do in Chefchaouen?

One more, special thing about this blue city is directed to cat lovers who will certainly be amazed by the numerous cats laying in the alleys and by the houses’ doors. This adds a cozy look to the little town and makes it an un-skippable destination.

In the other part of the country; there is the  “red city” of Morocco, being the most heavily touristic city in the country with less than one million inhabitants. From the circus-like square of ‘’Jemaa El-Fnaa’’ to the ornate palaces and stunning gardens, Marrakech offers a bit of something for everyone. Founded about 1,000 years ago on the edge of the Sahara, this southern market town developed immensely to become one of the great cities of Morocco.   The medina quarter of Marrakech is a UNESCO World Heritage Site where Many of the top sites to see exist,  including the Koutoubia Mosque, the Kasbah (markets), the Saadian Tombs, Bahia Palace, the secret garden, Jamaa El-Fnaa, and more. 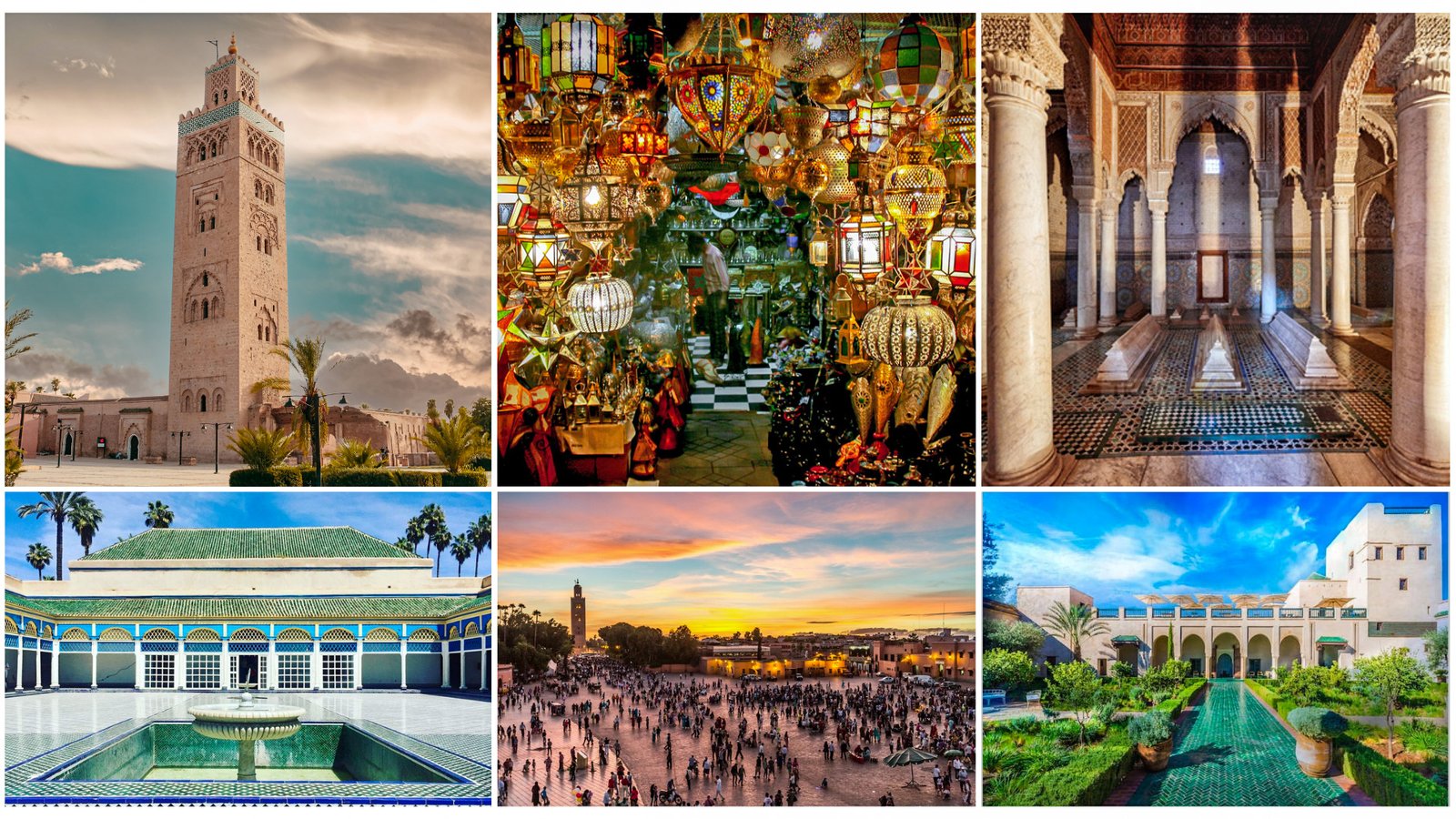 Marrakech is one of the four imperial cities of Morocco, it was a former capital of the country, a symbol of power and a fortress built during The Almoravid’s reign. It was founded in 1062 by Yusuf ibn Tashfin, leader of the Moroccan Almoravid empire. All of the whimsical squares, gardens, statues, and towering obelisks were designed using a method known as the Tabia – built from a combination of water and red mud forming pink-tinted buildings that reflects the sunlight. So, basically,  Marrakech is known as the “Red City” Thanks to its famous and inviting alleys,  plazas and the red walls that surround the old city, which has numerous huge gates which used to be shut at night in the old days. The walls are now iconic and peculiar to this city by all means.

Named the 9th best destination in the world in 2019 according to TripAdvisor’s community, Marrakesh is a must-see place in your lifetime! It has even been ranked among the world’s top destinations for street food by CNN, among the specialties offered in the stalls of the Jemaa El Fna square, you can enjoy: kefta or kebabs, a spicy escargot broth, or the famous Tanjiya… This city of romance, mysticism, theatricals, and royalty, lends a rose-tinted view of the world apart from the high-rise concrete realities of our life. Snow, sand, and greenery embody the past, present, and surroundings of this mystical city. Marrakesh is, perhaps, the ideal destination for adventure seekers and those looking to leave behind the hustle and bustle of a grey world to escape into rosy red hues.

It’s true that comparing the two cities feels more like ‘’the blue pill red pill scene’’ from the Matrix movie. Since one is super calm and the other is beautifully wild and chaotic. Yet, why would you pick only one pill, or city in this case,  while you can experience both? Sometimes the right choice is in the act of not choosing. 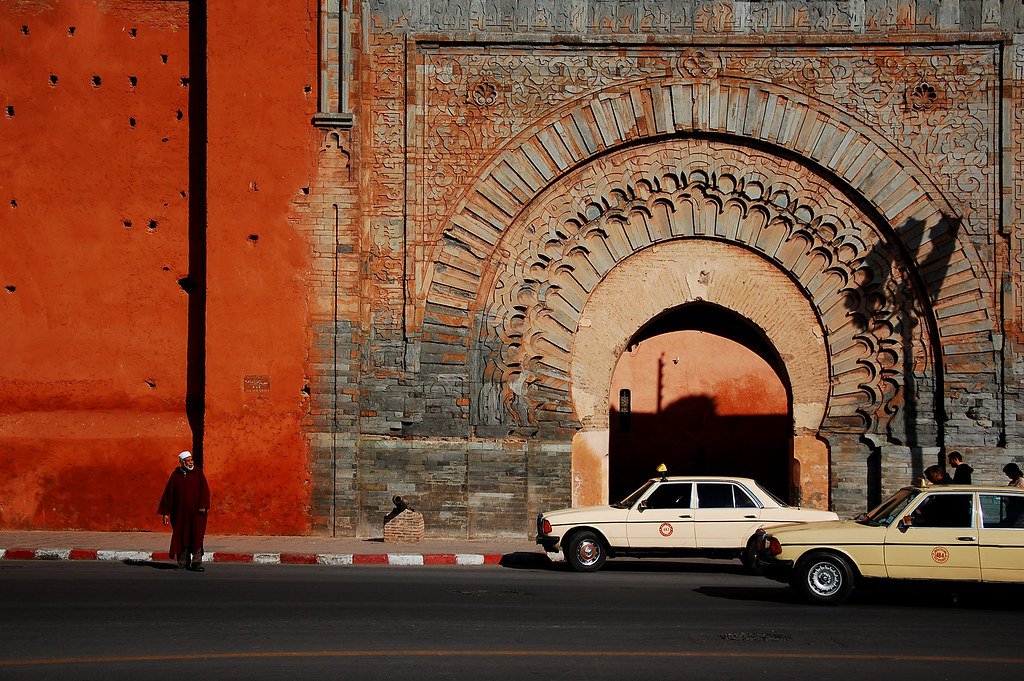 3 Thoughts on “Why is Chefchaouen blue while Marrakech is red?”