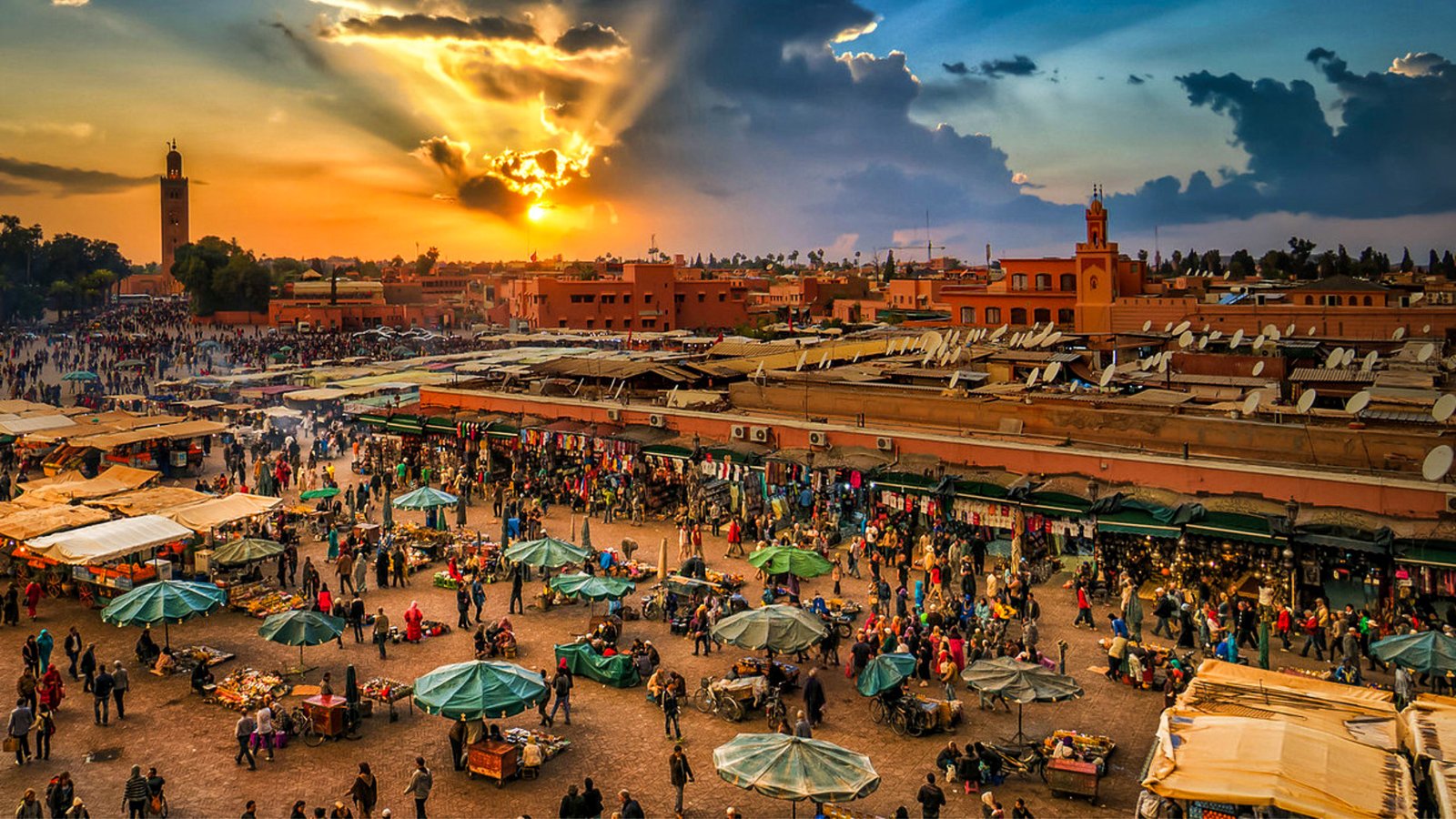 Marrakech, the Red City
It is impossible to escape noticing this. The instant you arrive in Marrakech you are confronted by red.
The buildings, the walls of the old medina city, the fortresses – even the tar seems to be tinted red. It’s almost like arriving in the Queen’s Red City in the first of the Narnia books.

Red is the colour of the desert, of the soil, and naturally it colours everything that is made or done in Marrakech. And when I say red, I mean red – as red as the Australian outback!

A frontier town from the start, Marrakech was the first significant city after crossing the Sahara heading  north. The main square – Jemaa el-Fnaa – is a riot of colour and noise. It is at the same time exciting, confronting, thrilling and overwhelming. It is a complete assault on the senses in every way. From snake charmers to dancing monkeys, street hawkers, restaurant ‘pimps’, gnaoua musicians and every kind of performance you can think of. 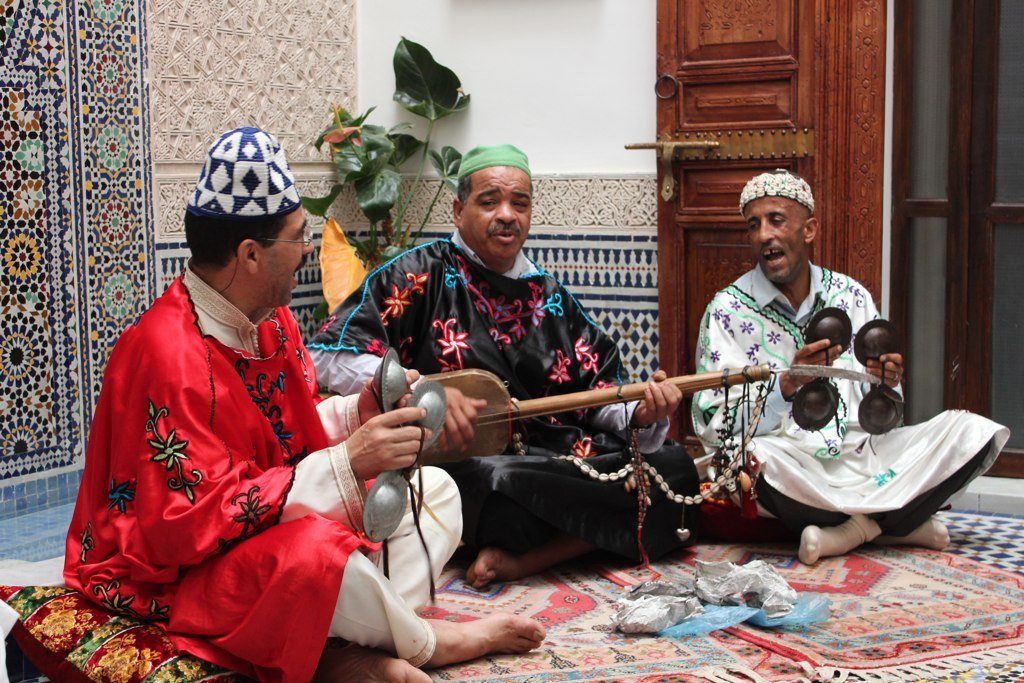 I imagine the original camel trains arriving hot and thirsty from their desert trip, the cries of the traders in Jemaa el-Fnaa Square as they compete to sell their wares. I see them all again in one of the many fondouq – the old inns which are now used for tourist shops – their middle an open courtyard for the animals, the rooms surrounding them two stories tall.

The horse rides and their dropping in the main square are a helpful prompt for “imagining” the smells.
It sounds like it’s out of an Indiana Jones movie or a fantasy book, out of someone’s imagination. But this is Marrakech, every bit as real as you and me.

How much has it changed?

On some levels, not at all. Marrakech was always a trade town, a frontier town on the edge of the desert. The customer today just comes from further afield, in planes and tourist buses instead of the old camel trains. But in essence, I think this has always been the soul of Marrakech, the red city. 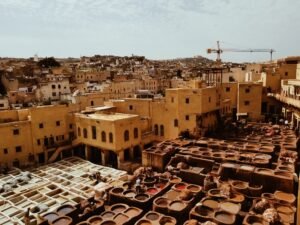 Fes, the Yellow City
From one extreme to another, the yellow city is Fes. An ex-capital, it was the city of sophistication and culture. There is money, of course, in Marrakech, but the money in Fes is old money rather than new – stately, rather than chased in a frenzy.

Fes has the biggest medina in the world. It is also the biggest city with no cars in the world. The loudest transport sound in the maze of streets in Fes is the clip clop of horses and donkeys. Everything is brought in either by them, pulled on a wheeled trailer by a man, trundled on a trolley, or carried.

The alleyways hide the secrets behind the walls. You cannot tell from the street that this is a small rundown house for several, and that one is an extensive palatial old home – maybe is a palace – owned by the rich elite and the rulers of Fes, decorated in the beautiful Arabic architecture and their exceptional details. 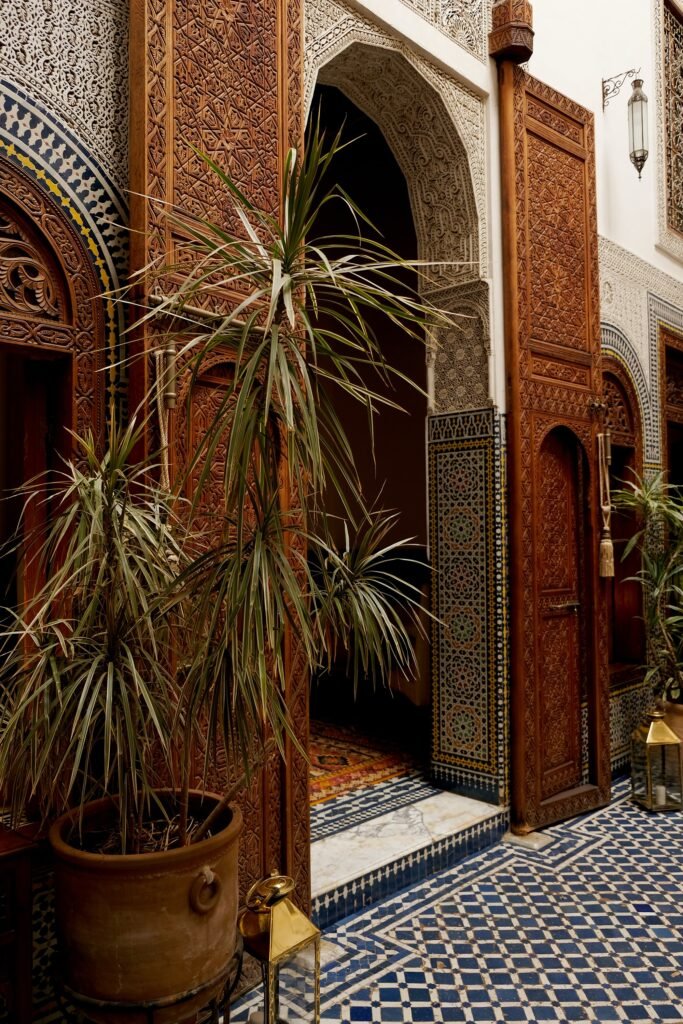 Between the tanneries, tourist stalls and food streets there is a real city being lived in by some estimates as many as 1 million people – they’re not sure. It’s impossible to count.
So where does the yellow come in?

The buildings are mostly a creamy yellow colour – uniformly so, elegantly lining the streets. If you get past the massive tourist area, you will find the normal markets where most people live and shop, residences with everything from crowded to elegantly restored. There is the old Jewish sector – the Jews played a huge role in Moroccan history until they left a century ago, with most towns having a Jewish cemetery and other curious Jewish landmarks and history.
But everything is elegantly creamy yellow. 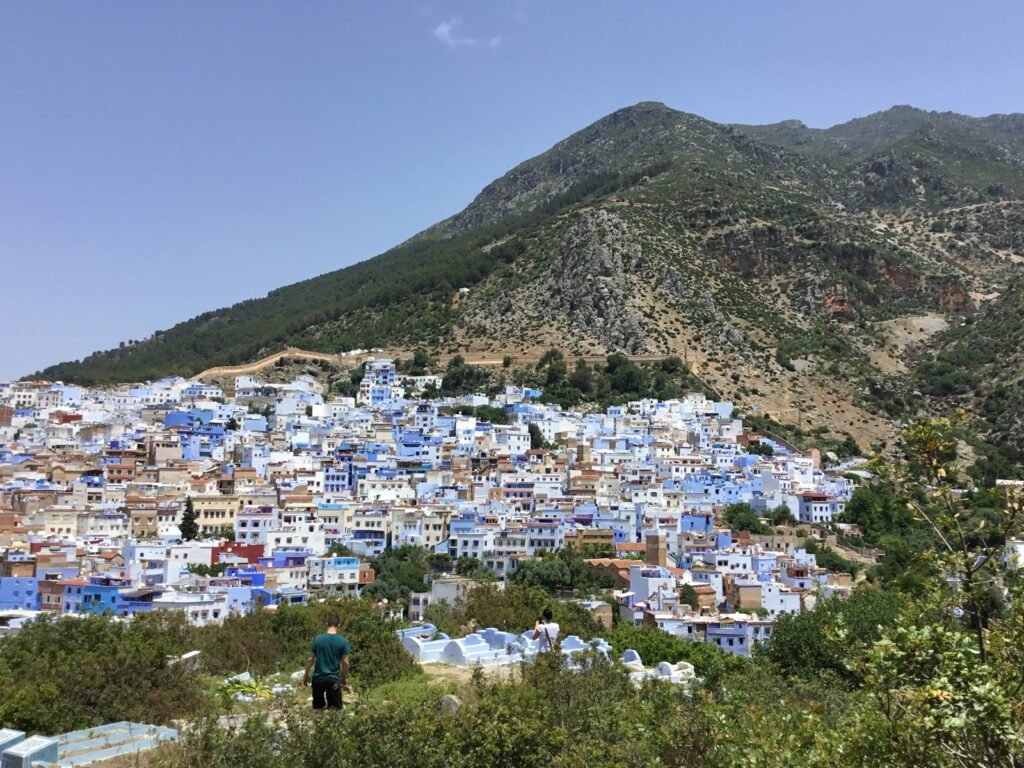 Chefchaouan, the Blue City
When I first heard of the blue city, I didn’t believe it was really that blue. But blue it is. Chefchaouan.
This little town is nestled in the hills between Tangier and Fes, the walls of its old medina painted blue – so blue it is breathtaking. And I don’t mean just a street – the whole medina is painted blue. Some streets are head high in blue, white above, others are completely blue. Every corner you turn is a different shade of blue, and another photo-scene. There are many stories about the origins of its colour.

One is that the Jews who lived there painted their homes blue because it reminded them of God. Others say it was a reminder of the colour of the Mediterranean Sea. Some claim that the colour repels mosquitoes, while yet others claim it feels cooler in the summer. 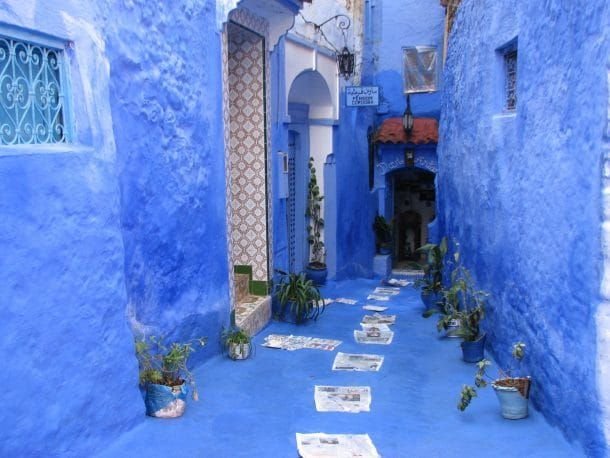 Though the stories insist that it has been blue for a very long time, the truth would appear that it is a fairly recent trend, from maybe just a century ago. Maybe it was something they clue into as being a tourist drawcard – which it most certainly is today. There is even a regular painting day when the whole town repaints the walls.

Chefchaouan is a beautiful and tranquil place to visit. It is easily reachable in a day trip from Tangier by grand taxis. There is no arguing with the many rooftops which have magnificent sunset views, and work exceptionally well with a Moroccan mint tea and maybe some Moroccan biscuits.

Alternatively there is a great half day walk to some falls, which is also a great spot to watch a sunset.
But there is no arguing – Chefchaouan is decidedly a blue city. 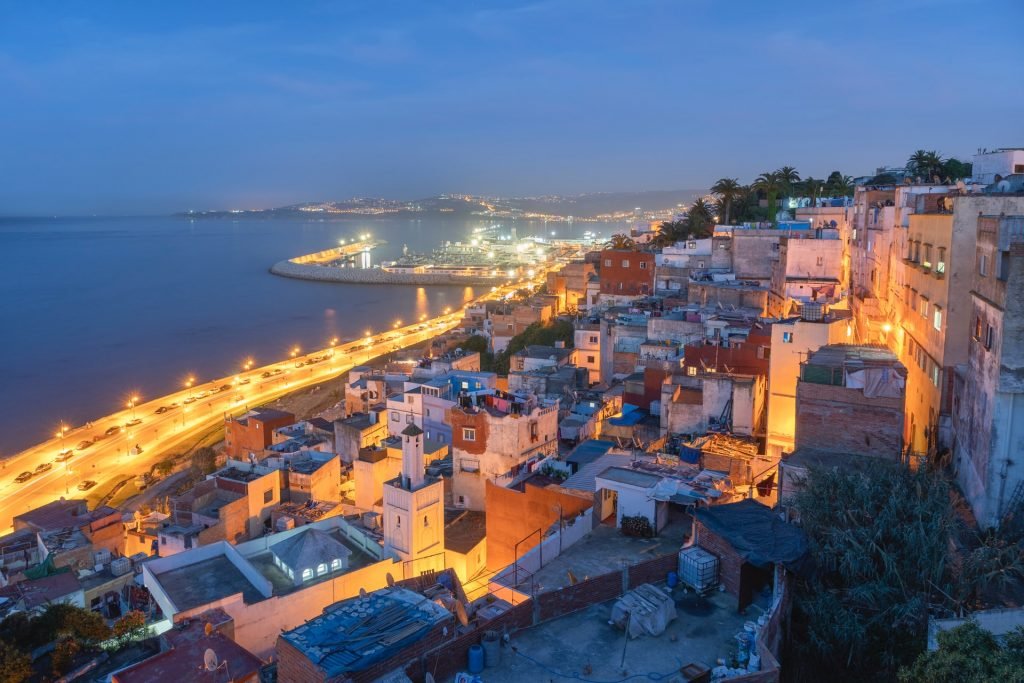 Tangier, the White City
Last but not least, another frontier town, the white city of Tangier.
With its tumble of buildings cascading down the hillside, the ancient medina is undeniably white. It doesn’t have claim of being the oldest, or the biggest, or the most touristy, but it’s very white from  outside, very colourful from within. It is a nice little medina and very pleasant to get lost within, plenty of spots to have tea with views of the sea.

Tangier sits between the Atlantic Ocean and the Mediterranean. It is also the gateway to Europe. There was a time when it was owned simultaneously by several countries, so that walking its length was a seamless international journey. It still has the effects of that period in its history – around the 1920s –with most locals being able to speak up to 4 or 5 languages, seamlessly jumping between them. Here in the north Spanish is also used widely, as well as French, Arabic, Darija and English. The signs around town tell you that as clearly as their absence in other cities in Morocco.

Maybe because of this international influence, maybe because it’s at the extreme edge of the Arabic- Muslim world, maybe because it is the gateway to Europe with a mere 30 km of water between the two continents, but Tangier is almost apart from the rest of Morocco – a rebel town which likes to do things its own way. A frontier town of a different type. 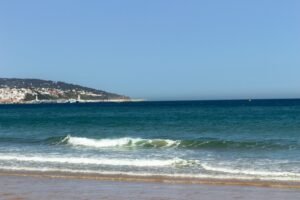 It has the beaches and a nightlife unlike the other cities. You can have tea while simultaneously looking over both the ocean and the sea at Café Hafa, right near the ancient Roman graves on the clifftops – also a great place to contemplate the Strait of Gibraltar. You can see Spain – almost the only place in the world where you have views of another continent across water. You can sip a wine at Chiringuito on the harbour front, watch the yachts and the sunset, or look the other way at Tangier Bay and its beach over a cup of coffee or some ice cream.

Take a walk up the steep hill to the Kasbah, or the hill alongside the medina and the Spanish Steps, and stop on the way for a true foodie experience with Blue Door Cuisine – learn how to make one of those excellent Moroccan dishes to impress your friends back home.

There are your four colour-cities of Morocco.

Marrakech the Red City, Fes the Yellow City, Chefchaouan the Blue City, and Tangier the White City.
Come and check them out and see for yourself if you agree. 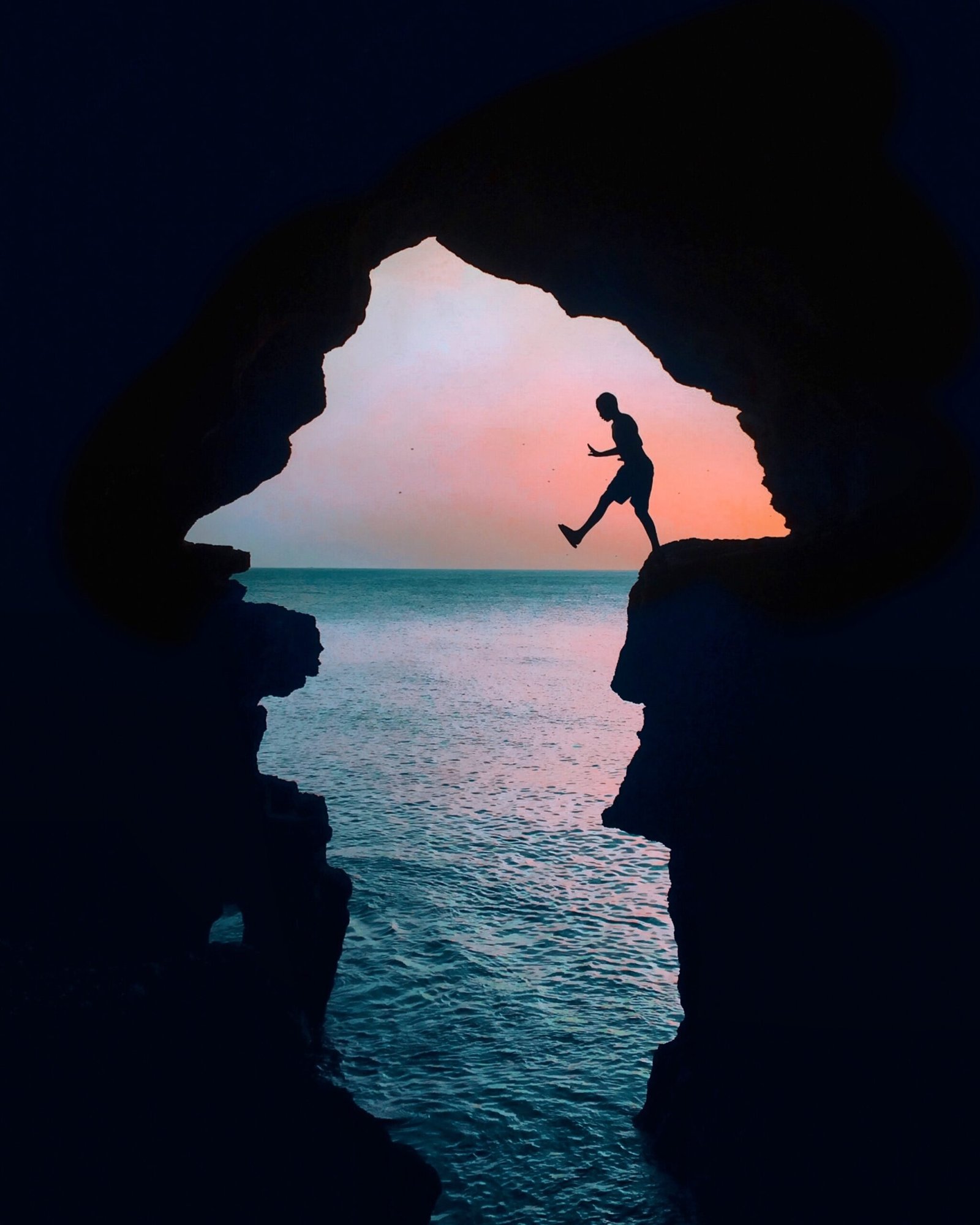