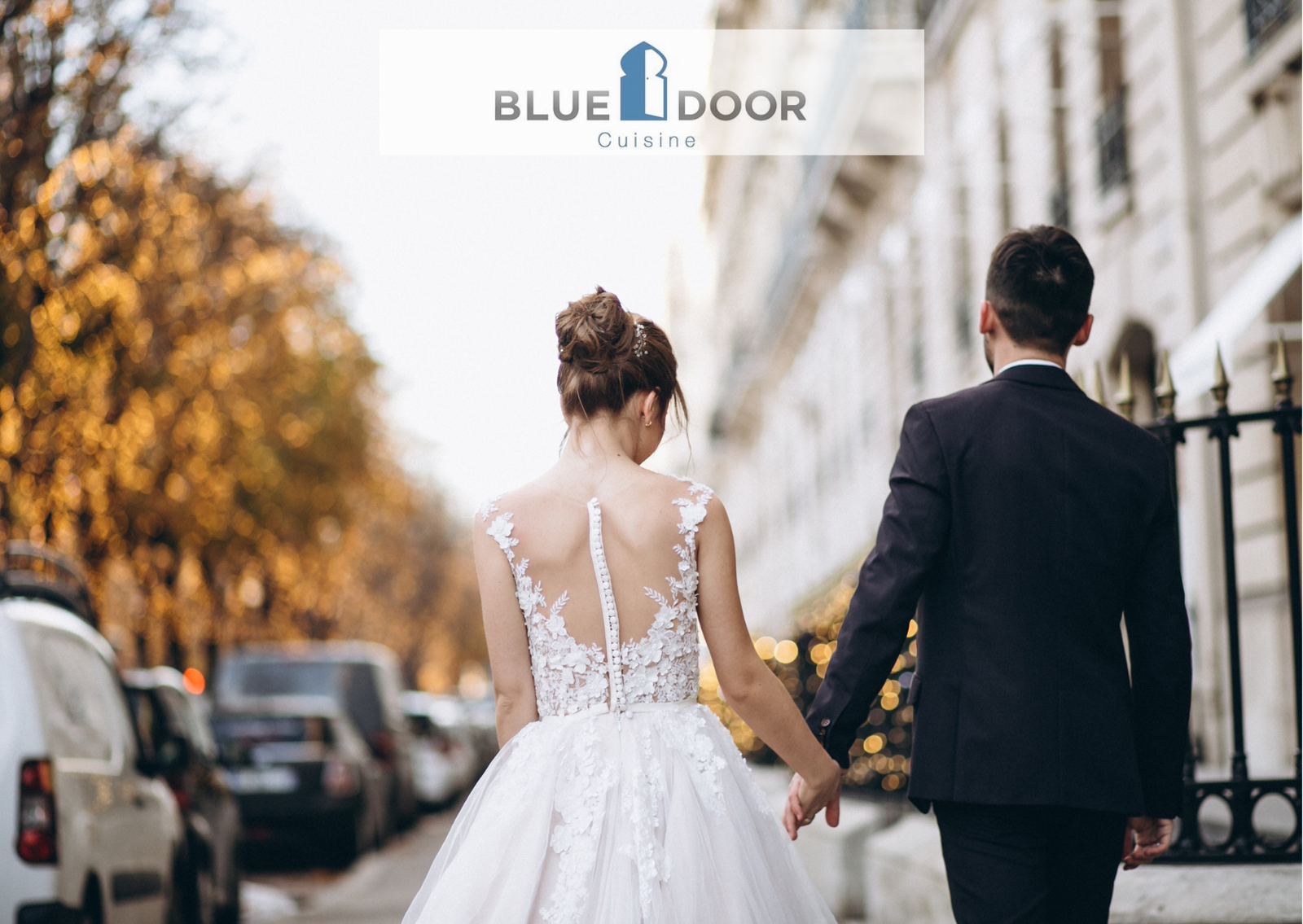 Have you heard the ululating on the streets and rooftops on weekends?

Have you heard the drums and trumpets making their way through the streets?

Have you seen the music bands with the guy who can play his instrument while keeping up a twirling of the tassel on his hat?

All this is part of wedding and the party culture in Morocco.

The weddings I’m familiar with goes a bit like this: the bride dressed in white with a veil and a suit for the groom. A walk down the main aisle of a church to the wedding march at around 3pm, photos and then to the dinner venue for cocktails with dinner around 7pm. Next comes the first dance, music and dancing with it mostly done by around 11pm. The bride and groom leave to go to their hotel or their honeymoon in a car badly decorated with “JUST MARRIED” written in shaving foam and trailing behind them, a very noisy bunch of tin cans and old shoes. Very small, just 30 people, include the relatives and you maybe have 60 people – and of course anything up from there if the family is big or there are a lot of people to impress.

In Morocco the bride and groom both wear beautiful kaftans which can be in any colours, and as bright as you like. The wedding might be booked for 4pm, but on Moroccan time that means more like 7-9pm. There are the photos, and the ceremony with exchanges of vows and food and drinks, and Moroccan music with a live band and dancing – for the women. Beautiful nut biscuits and juice will be given to the guests, the bride’s hands decorated with the beautiful henna patterns to ward off evil. And finally dinner – will be around midnight, or later.

There are three steps in a traditional wedding, which can take place over a period of a year. 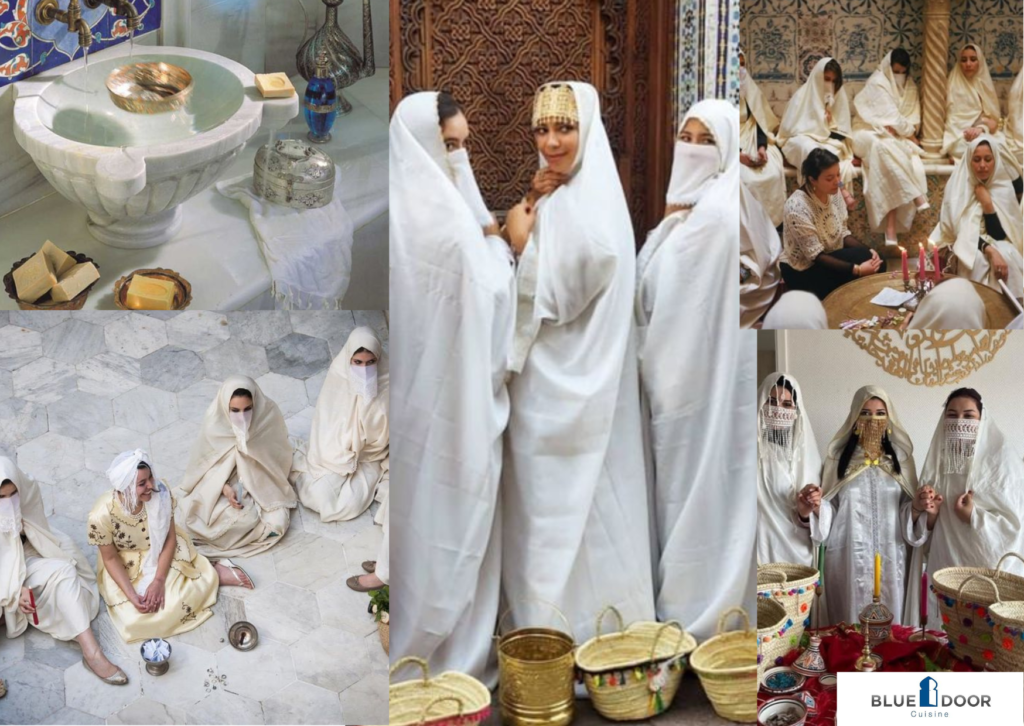 A traditional Moroccan wedding will start with a proposal, which is a very public event as part of the dinner where the two families meet and decide if they are compatible – the families, that is, not the bride and groom.

Arranged marriages are still quite common in Morocco.

Young people today are often finding their own partners, but with a very protective attitude over girls it can often be difficult for her to find someone suitable when situations for socializing are so limited. There is a significant number of young women who grow up with curfews and are never allowed to stay outside the family home, even as an adult.

I heard of someone’s aunt asking for permission to move out by herself. Even though she was 30 years old she was told that she would stay living at home until she got married. The woman’s honour is of paramount importance, and it cannot be considered preserved unless she is kept sheltered in this way. This may seem strange to us in the west, but it is done for the girl’s protection. 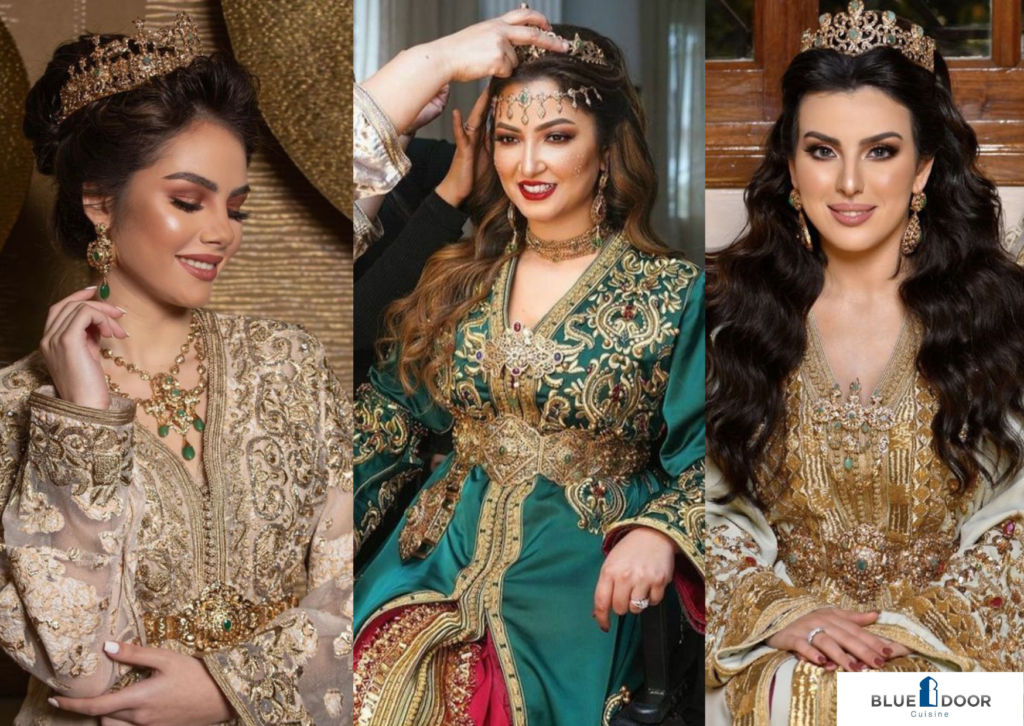 There is usually a huge engagement party to formalize the arrangement. In Morocco the public image is everything, the paperwork just incidental. These engagement parties may last for three days and two nights, with singing, dancing, food, henna and gift giving, and an endless array of beautiful gowns for the bride to be to wear.

Now it is the time for the extended family. When life is quiet, drama has a great appeal. I rather think it might be a sort of a game. It starts with endless questions by the aunts and uncles, some drama perhaps, and a chance for some interference. The end goal however, is a process so that by the time the big day arrives, everyone heartily approves of the match and is ready for the wedding day celebration itself.

A Moroccan girl may not marry outside her religion. So if it is for example an international marriage, the groom must convert to Islam. However, Moroccan men are able to marry outside of their religion.

This sounds ominous, especially for those with incompatible beliefs. But in the end, it is just a matter of a chat with the Imam (priest) promising to be a good Muslim boy – and there’s your stamp of approval. 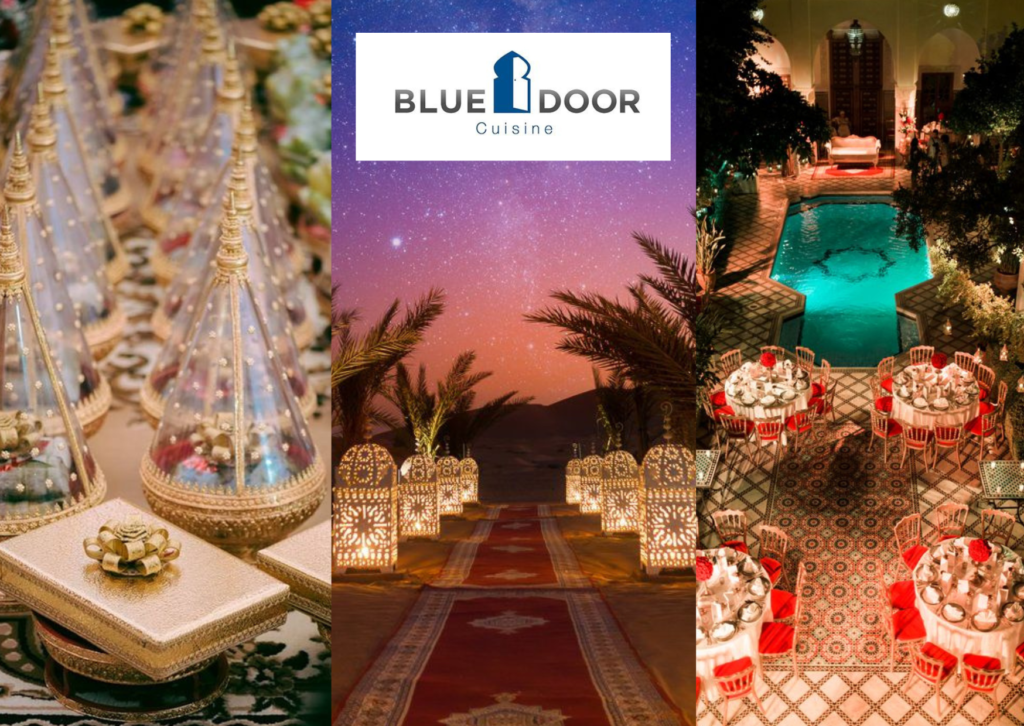 Finally the wedding day itself arrives.

After a morning – or afternoon – of makeup and hair, the bride and groom will head to the venue to dress. Unlike in the west where it is often considered bad for the bride and groom to see each other on the day until she arrives at the church, in Morocco it is unseemly for them to arrive any way but together.

They will both dress in beautiful kaftans, which can be of any colour, and as bright as you like.

The traditional western white wedding dress can be very beautiful. But so can the Moroccan gown. They are magnificently embroidered with a contrasting colour in the lining. It is designed in a way to open and show this beautiful colour contrast. It is also significantly longer than she is, only partly offset by the high heeled shoes – so she can elegantly hold it up at the front to ensure plenty of splashes of the contrasting lining.

The wedding I saw, the groom’s outfit was a beautiful match. Her ivory Takeshita had a green lining, his traditional baggy ivory pants and shirt were under a see-through gossamer green coat that matched her lining – an echo of the bride’s colours.

Both looked magnificent and elegant. 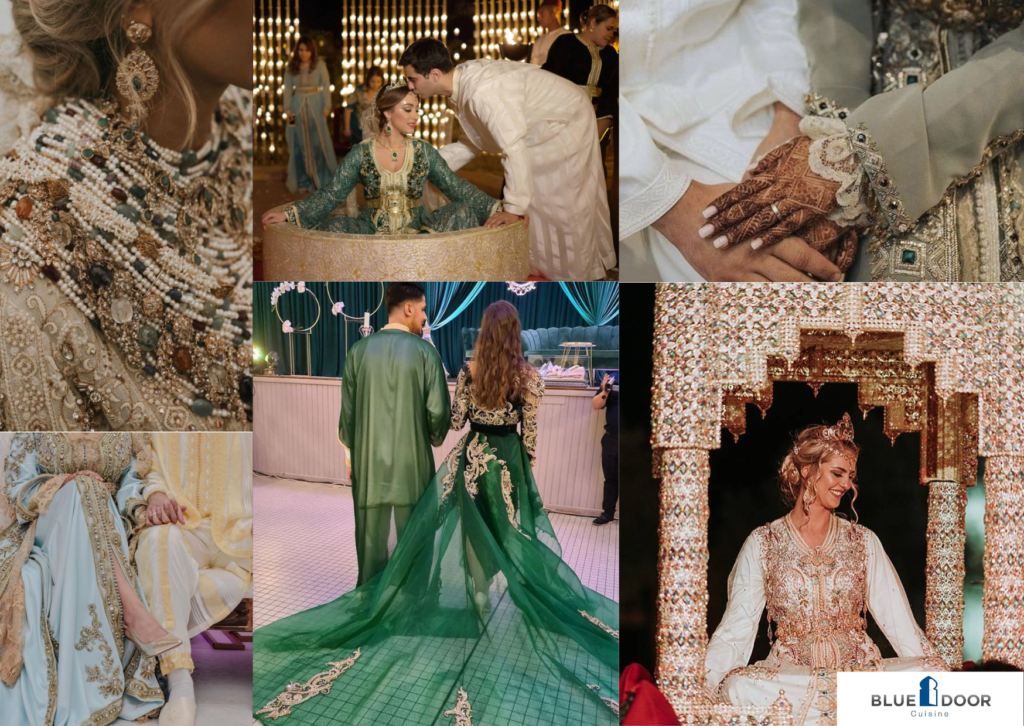 Though the guests were invited for maybe 4 or 7pm, it is already 9pm and the party is just about to begin. But here we are on Moroccan time – and in that sense, everything is running perfectly to schedule.

Once all the guests have arrived, the bride and groom make a grand entrance together. They are greeted by the women ululating the wedding chant praising Allah. It gives a thrill which must be quite a buzz when it signifies a tradition like this.

The couple sit ‘in state’ – together at the centre of attention. They are greeted and congratulated by all the family and guests. The bride’s grandmothers both had the traditional chin tattoo of the Berber people of the Rif Mountains.

There are snacks of beautiful nut biscuits and dates filled with walnuts, which is accompanied by fresh milk. A live band plays traditional Moroccan music, and the women get to dance. (For once the men must sit and wait). 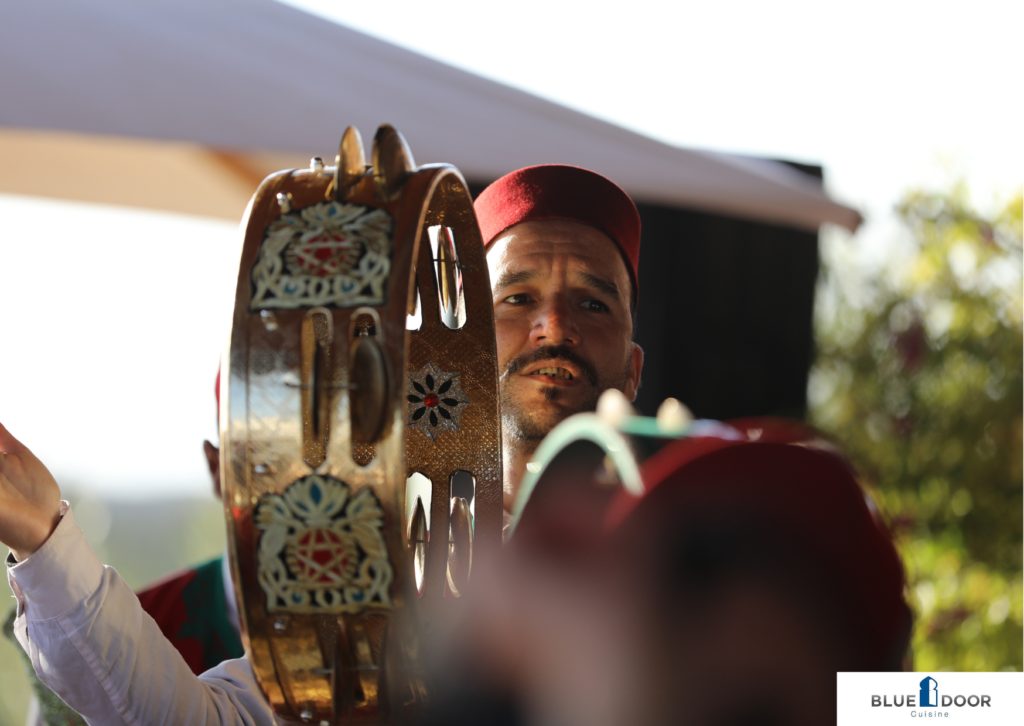 While friends and family exchange gossip (the men and women generally separated), the bride’s hands are decorated with the beautiful henna patterns to ward off evil, and well as some of the female guests.

The rings in Morocco are the reverse of the west. I have grown up with the idea of a fancy engagement ring with a pretty stone, followed by the plain wedding band. In Morocco, each gets a plain band as part of the engagement, and the fancy ring comes at the wedding ceremony.

At the small altar, the bride and groom give each other sips of milk, then juice, and feed each other a spoonful of the cake and biscuits.

Then, in the spirit of all good weddings, there is the photo session. 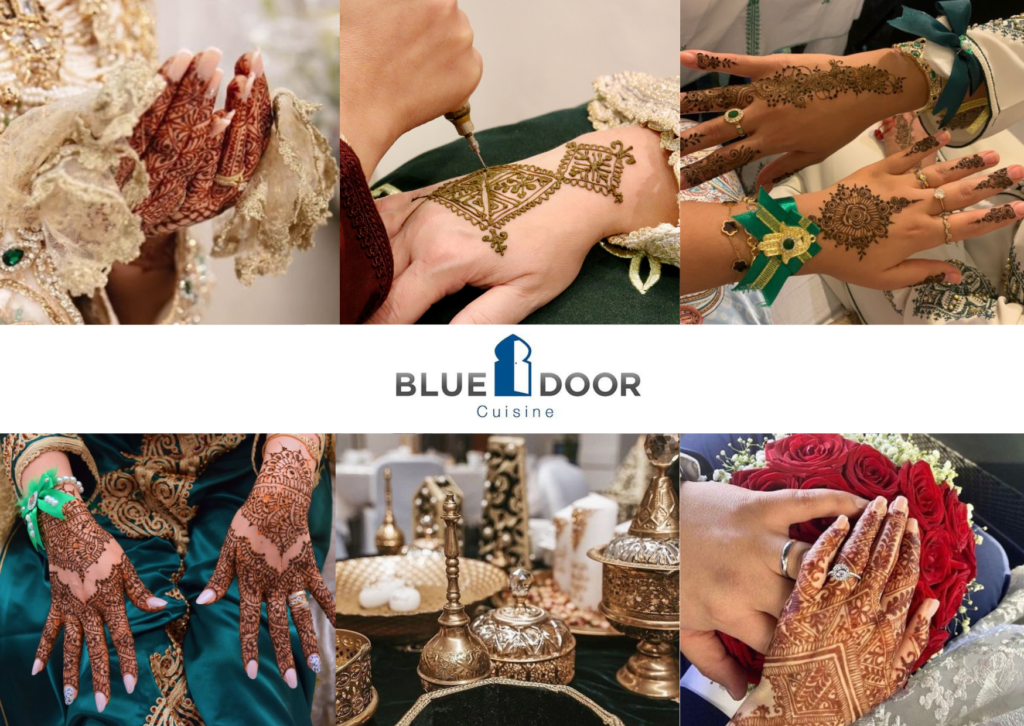 The whole area had been done up beautifully with coloured lights wound around the trees making the garden glow in neon. Maybe a shock to the west where black is specific to death and funerals, the tables were set up with black tablecloths embroidered with insignia. They were spectacularly luxurious.

Finally, perfect to Moroccan timing, the food was served at midnight. In this case, big trays of prawns and fish, plates of Moroccan salads, followed by the traditional pastilla – a sweet chicken mince wrapped up in puff pastry.

Followed by cake of course.

It was a truly beautiful occasion.

If you have a chance for a Moroccan wedding, don’t hesitate. But even if not, you can head to Blue Door Cuisines to make your own pastille and try the beautiful Moroccan biscuits. I love nuts, so for me they are heaven. 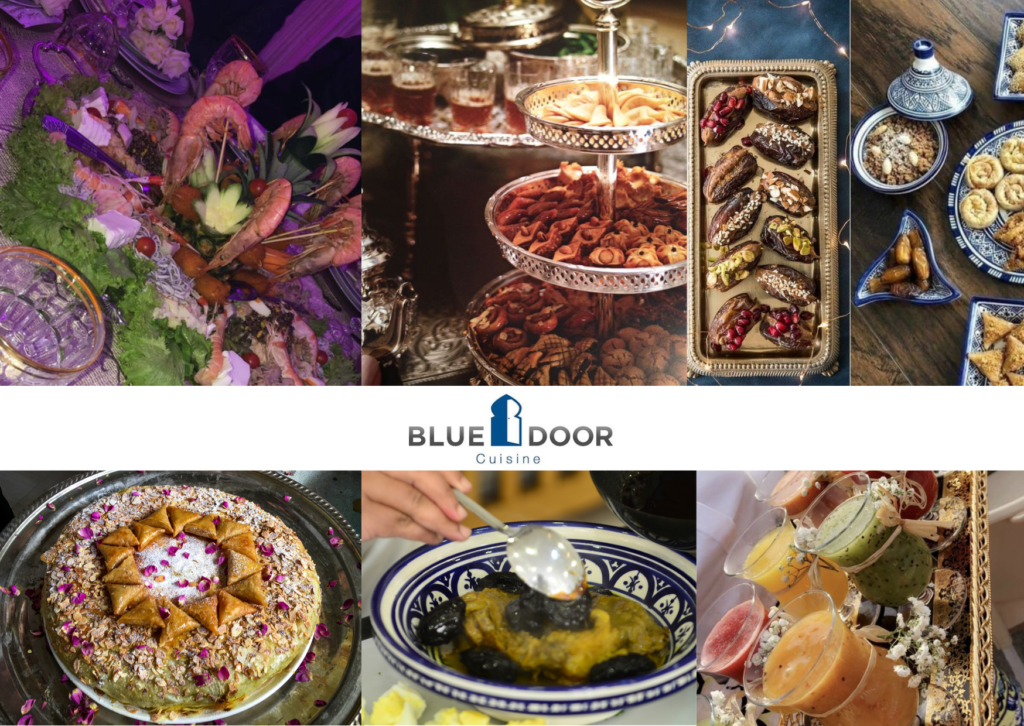