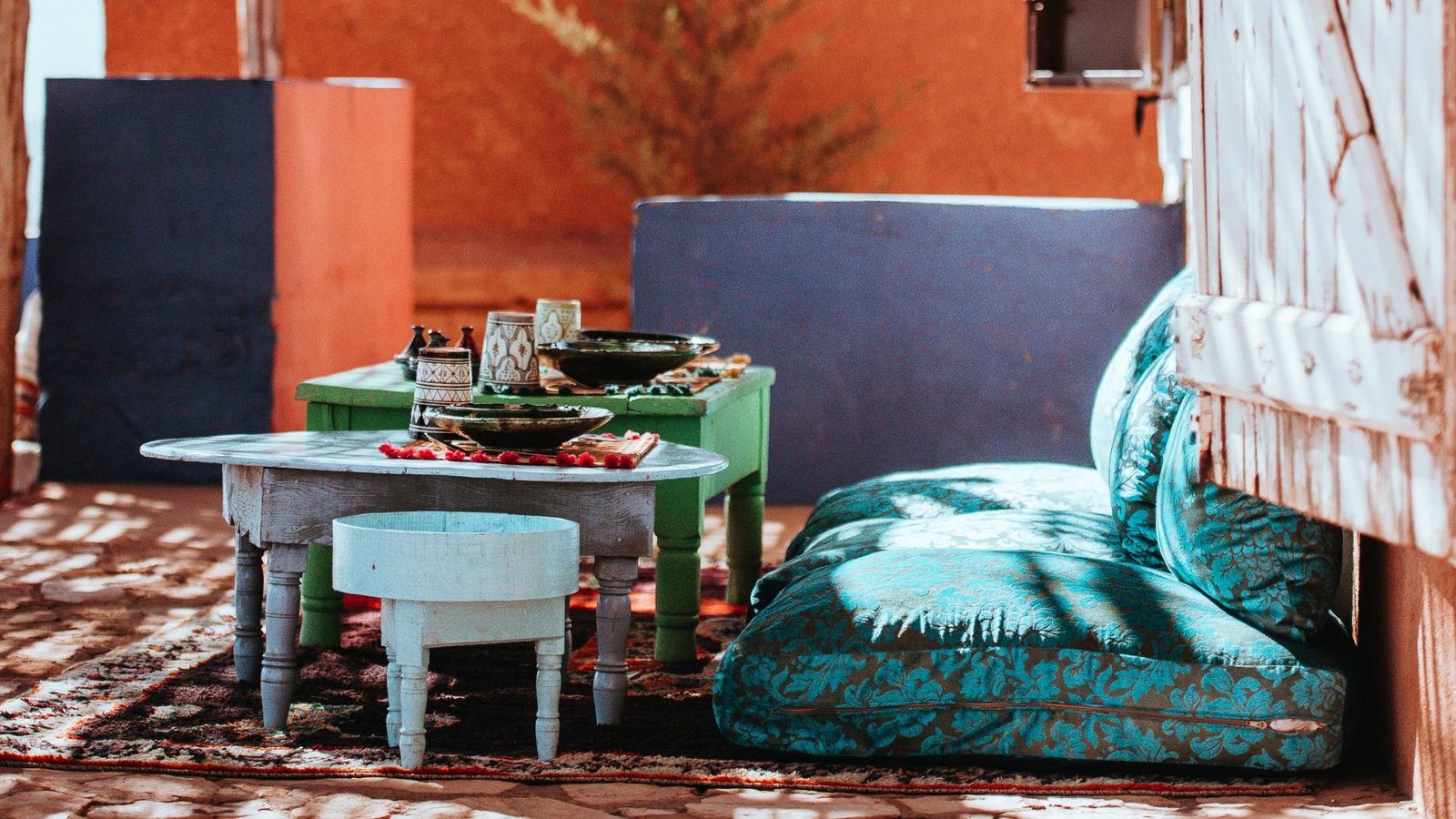 Curious about Moroccan cuisine and what you should try upon your arrival?

In the following lines we attempt to provide you the reader with a portable menu to guide you through an unforgettable experience of re-educating your palate! Might this become a prescription for a regular hit of dopamine for your body and soul? 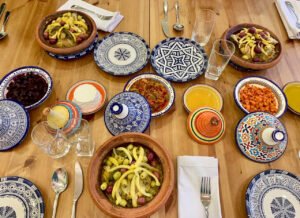 Both of these can be Googled with ease, but allow us to explain how it is that the tagine (this word refers both to the clay pot and the stew in which it is cooked) is shaped as a pyramid with its cone shape. Know, first, that everything in Moroccan cuisine is made for a purpose. In this case, the pointy head is meant to allow heat to build up at the top of the cone. This then builds up moisture and this moisture drips back down onto the ingredients, allowing for a very moist and tender final product. Like a heavenly technique that enables us to create rain at home, this food is much tastier than that cooked in a pan or casserole. 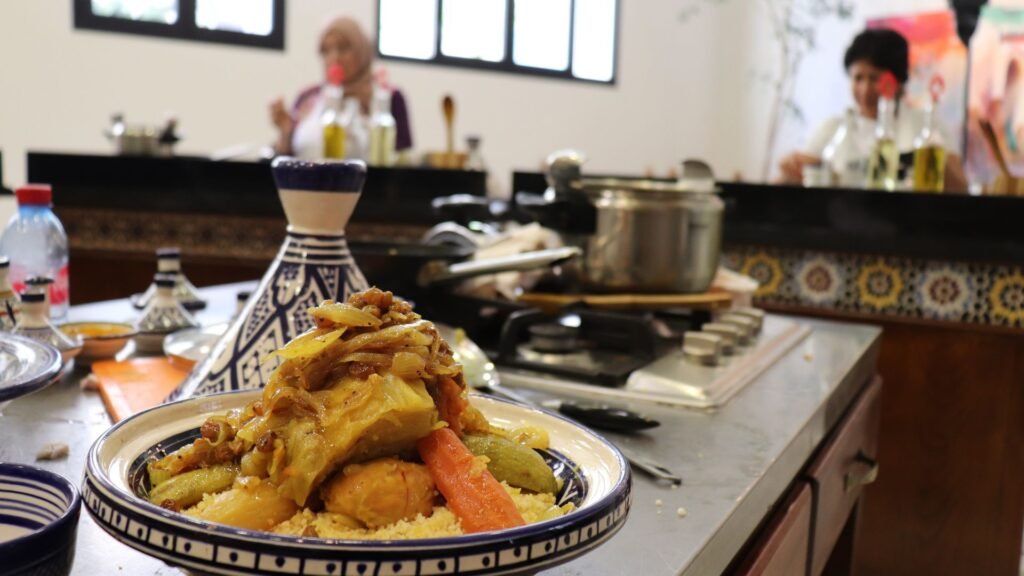 As we turn from one homemade rainy sky (the tagine) to the other “star”, we discover anew couscous. An Amazigh (North Africa’s indigenous ethnic group often considered the original settlers to the region) tour de force, couscous. Couscous is presented in home after home, city after city, and throughout the countryside primarily on Fridays. Made from steamed semolina grains, it is usually served with either meat or chicken accompanied by diverse vegetables. The result is a colourful, heart-warming dish that changes your mood just by observing it, let alone having a taste of it. Served on one large common plate called a gsae, some populations in the regions of the Sahara and Atlas mountains prefer to eat with their hands!

A Moroccan Wedding’s Other Couple:  Bastila and Beef with Prune Tagine

Bastila is a sweet and savoury pie that is traditionally served in weddings and celebrations as a luxurious dish. Every ingredient used in bastila makes it unique and irresistible. The two key types are seafood bastila (shrimp, calamari, fish) or chicken bastila mixed with Chinese vermicelli noodles. Both come wrapped in Moroccan pastry sheets called warqa. This dish is nothing short of the fulfilment of that expression, “sugar, spice, and everything nice” … 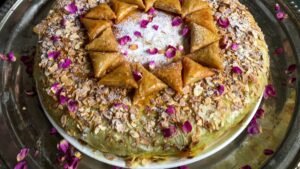 At that Moroccan wedding you may expect the bastila to be followed by a beef prune tagine – which always comes second. But, O, the juiciness and tenderness of that latter meal! These two qualities are quintessential when it comes to the meat quality used in this dish. Think fireworks – sweet, dramatic, and warming to the soul. This mixture of spices and the flavour of prunes provokes a mouth-watering sensation just by the smell. You begin to notice that your hand almost automatically continues to reach for morsel after sumptuous morsel! Good thing that prunes are full of fibre, something which adds to the sudden gladness of heart in what can, for some, be the highlight of a wedding (well, apart from the dancing through the night!). 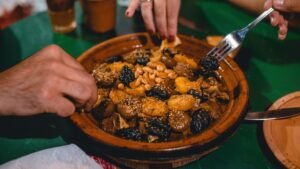 Rfissa: What does this Dish have to do with Giving Birth?

Along with a mixture of lentils, shredded pastry (msemen or meloui), and chicken, rfissa’s signature broth is uniquely and fragrantly seasoned with ras el hanout, fenugreek seeds, saffron, and other spices such as msakhen. Because this chemistry can add an element of heat, rfissa is favoured in cooler weather – or on the third day following the birth of a baby, due to health benefits that fenugreek offers to a nursing mother. (Apparently this seed lowers inflammation and helps with mouth ulcers and other infections in the body.)

While visiting the “Red City”, Marrakesh, one dish becomes apparent – tanjia. Also called tanjia marrakechia, it can be referred to as the “daughter of ashes”! Cooked in a clay urn immersed in burning coals usually in the ground, its primary ingredient is sheep’s meat. Not too complex in terms of spices, one adds to it preserved lemons, salt, garlic, cumin, saffron, a touch of olive oil, and just enough water to keep it from sticking to the pot. Unlike other dishes, tanjia is cooked with immense care and requires patience. Fun fact: both tanjia and Moroccan bath water are heated in the same furnace! One notices that the tanjia pots are nestled into the ground surrounded by coals, and left to slow cook until the meat is tender. 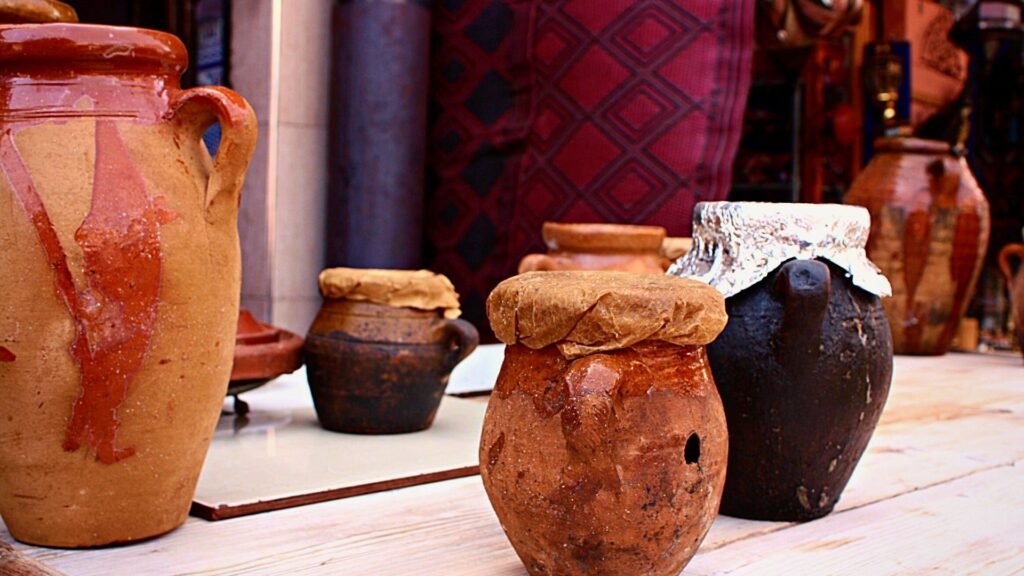 Another fun fact: In previous generations artisan shop workers in Marrakesh took off the day for Muslim prayers – Fridays.  That meant that every Thursday night one of their representatives in the community went around and collected money from everyone in order to make one big tanjia (or several smaller ones).  Some consider it something of a man’s dish.

All food shared anywhere in the world is best enjoyed with those beloved to us. Moroccan food is no exception. A love language, a symbol of care and joy, meals here – and the hours of their preparation –  have transformative power. Recognizing this, we at Blue Door Cuisine in Tangier, would like to invite those  planning a visit to Morocco to consider adding us to the itinerary. We are uniquely equipped to help you prepare and experience for yourself some of the above key actors in the life of Moroccan society. Check us out! 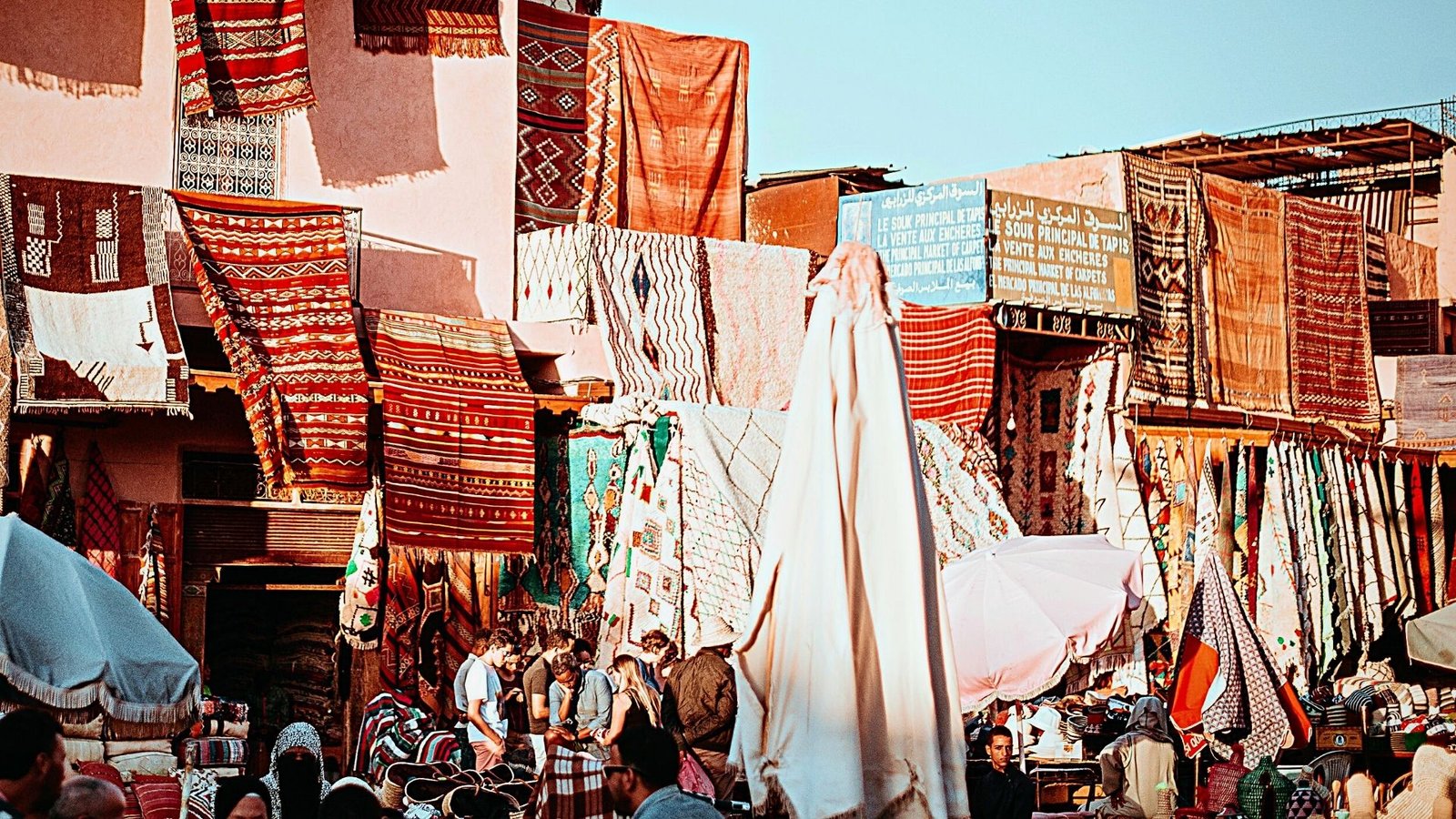 One Thought on “The Joys of Moroccan Cuisine”