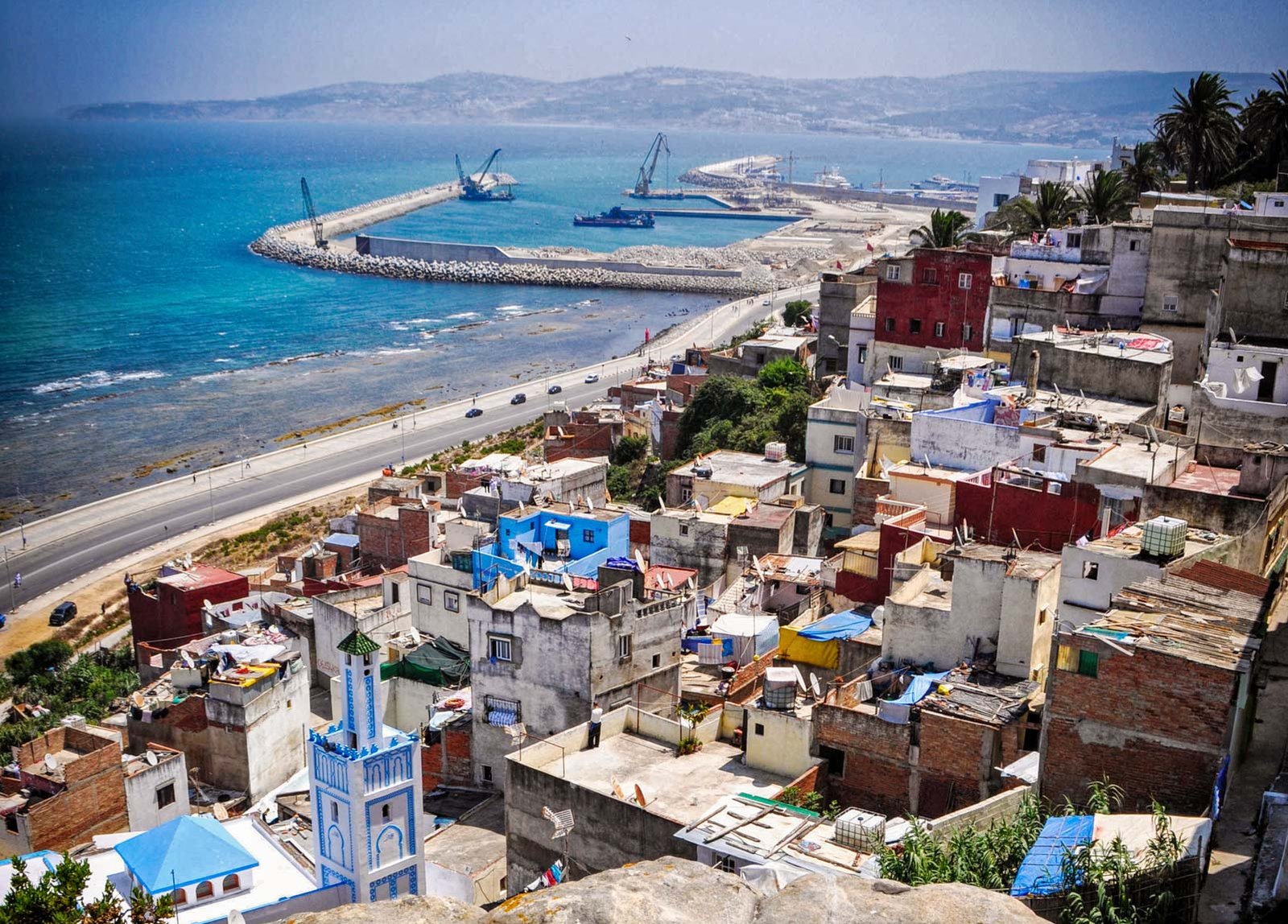 Tangier is one of the oldest cities of Morocco. It is over 2,500 years old with a beautiful mix of cultures and nationalities. This is mainly because of its strategic location. Tangier is located on the Strait of Gibraltar, making it the portal to Europe and home to different cultures and religions. The city is crucial to the trade between the two continents, Europe and Africa.

Tangier has also been labeled “the white city” because of its immaculate white houses. It holds one of the richest histories and cultures in the world. The style and nature of the white city are very beautiful and inviting. One can never feel bored in Tangier, thanks to its unique diverse setting – nestled between the sea and rolling hills. Its land is also the arena where culture and traditions mingle and clash, giving birth to a fresh diverse culture.

For those who want to visit or are interested in unraveling its secrets, here are ten interesting historical facts about Tangier, Morocco:

From an ancient Greek, to a Phoenician, and later a Roman port, Tangier had been occupied by plenty of nations and peoples like the Moors and the Portuguese in 1471. It was initially founded by Carthaginian settlers in the fifth century BC. The city was also extremely valuable to the Berber people as it held the name of a Berber god: Tinjis. Tangier fell later under English rule in 1662. During that short period, it was called ‘English Tangier’ until it was abandoned to the Sultan of Morocco in 1684. It became part of Morocco in 1956 after undergoing an international control from 1904 to 1956 – except during the Second World War. This varied and complex history lives between the walls of the monuments this city preserves as part of its historical identity.

Tangerines and Tangier; just by comparing the two words you can deduce that one certainly correlates with the other. Tangier is agriculturally known for Tangerines as the fruit originated in the city. That is why this sweet goodness has been named after the white city. From the family of Mandarins, Tangerines grow and serve as a delight to Tangier-dwellers, who can consider themselves lucky since the homegrown fruit does not get exported elsewhere. According to the Oxford English dictionary, people who lived in Tangier were also once called Tangerines.

Morocco is known for its delicious fresh tea. However, Tangier is the original city known for the special Moroccan mint tea whose main ingredient is, of course, mint!  You can enjoy Mint Tea anywhere you go in Tangier, especially in Petit Socco, which translates from Spanish into “the Small Market”. People from all around the world gather in this historical place which was once known as a place for drugs and prostitution, to savor their freshly made mint tea accompanied by some freshly baked cookies specific to Tangier. A pure delight!

4.     The final resting place of Hercules

The legend states that Tangier is the final resting spot of Hercules in a location known as Hercules Cave. It is located just outside the city, and is a very popular tourist attraction. The cave has two openings, one towards the land through which tourists and visitors enter, and another facing the sea known as ‘The Map of Africa’ since its shape resembles the African map. This particular shape was not carved by the force of nature, instead it is believed that the Phoenicians created the sea opening to look like the African map.

As for the name of the cave, it is said that the Roman God Hercules stayed and slept in the cave before performing his 11th labor–one of the 12 labors that were assigned to him by King Eurystheus. It consisted of getting golden apples from the Hesperides Garden located near Lixus, commonly known as the Moroccan city Laarach. Whether you are a mythology fan or not, you will certainly enjoy visiting this famed and picturesque site.

Yes! You read that right. The city’s history does not cease to amaze us. When the Portuguese arrived in Morocco, capturing the city on their second attempt in 1471, they handed it to the British 200 years later as a wedding gift for King Charles II. The latter acquired the city as part of the dowry when he married the Portuguese princess, Catherine of Braganza. The marriage treaty was an extensive renewal of the Anglo-Portuguese alliance. The Brits owned the city until 1689, when the Moroccan Sultan Moulay Ismail and his army attacked the area, taking over the land.

The city of Tangier has a checkered past. During the 19th and 20th century, the immaculate white city lost its purity and became the home of international spies. It was a safe ground where many spying and smuggling activities took place. This is one of the reasons why Tangier was brought up as allocation in multiple spy fiction books and movies, such as the popular Bourne series and few James Bond episodes.

During Morocco’s famous colonization by France and Spain, and while the country was divided between the two powers, strategic Tangier remained an independent city. It was an international zone of various sectors, similar to West Berlin during the Cold War. France, Spain, Holland, Britain, Sweden, Portugal, Italy, Belgium, and the USA all had a share of the prize, which was managed by the Moroccan Sultan.

Similar to any independent zone, Tangier had its own flag between 1923 and 1956, and was administered by France, Spain, Britain, and Italy. This is demonstrated through the various monuments around the city. From 1932 until it was declared Moroccan property in 1956, Tangier was an international tax-free zone controlled by a committee of 30 nations. During this era, Tangier acquired a bad reputation due to the illicit activities that began to expand on its land, such as financial fraud, espionage, smuggling, and outrageous sexual license by wealthy and eccentric expatriates.

The promise of cosmopolitan freedom operated as a magnet to attract art to the city of Tangier. In the 50s and 60s, a small community of expatriate artists and writers relocated to Tangier. The man who started the trend was Paul Bowles, an American writer who moved to Tangier permanently in 1947. Among his works are The Sheltering Sky and Let it Come Down.

King William S. Burroughs lived in Tangier for 10 years as well, where he wrote Naked Lunch after being inspired by Paul Bowles’ fiction. Burroughs also felt at home while writing about the city and the surrounding areas, especially that it offered him what he needed, drugs. During this period, Opium was easy to acquire in Tangier. The city also offered Burroughs the freedom to freely express his homosexuality. Evidence of the hallucinogenic side effects found in the Opium he acquired in Tangier are evident in his writings.

Tangier also served as an attraction to many other artists such as Matisse and Tiffany. This gave Tangier the title of the vibrant and creative city.

The American legation is the first American public property outside the US. It commemorates the historic cultural and diplomatic relations between Morocco and the United States. Morocco was the first country to publicly recognize the U.S. as an independent state. The American Legation is the popular name of this institution, but the official name is the Tangier American Legation Institute for Moroccan Studies. It incorporates a rich and diverse museum, a research library, as well as a cultural center concentrating on Arabic language studies.

10. Tangier sentenced to death by starvation

“Anything could be bought at a price” was part of the mythos of Tangier’s International Zone period. During that time, Tangier gained a bad reputation in the West as the land of criminals, spies, businessmen, and adventurers. When the Interzone period ended, the city entered a long period of decline and became a dreary port. Moroccan King Hassan II neglected the city and starved it of funding. Street hustlers multiplied, turning off tourists. The number of expats dwindled, until there were only a few thousand left during the end of his rule.

11. From the excrescence of the earth to the pride of Morocco

Tangier succeeded to get rid of the bad reputation it gained after the English deserted the city and left it in a devastating state. It became the site of major development under the Moroccan rule, focusing on the renovation of its port—Tanger Med, The Marina Bay, and most recently the highspeed Train, Train à Grande Vitesse (TGV). The TGV links Tangier with Morocco’s economical capital, Casablanca – the train reduces the journey significantly from five hours to two hours.

The city has also become one of luxury and fine dining. Its main forte comes from making tourism its central economic activity that is constantly developing and growing. In this manner, Tangier grew from being the excrescence of the earthas the English diarist Samuel Pepys called it, to a city of immense development and economic prosperity.

Tangier is extremely rich in history – it was the forbidden fruit of which everyone wanted to eat, underwent starvation a bad reputation, hosted international art in all its forms, luxurious hotels, and highly developed sites. Tangier’s culture is a fusion of ethnicities and traditions, this wonderful mix creates a diverse and unique sophistication. Tangier succeeds in making each and every visitor feel at home.

Hajar Ben Bouazza
Hajar Ben Bouazza is a 22 years old master's degree translation student at King Fahd school of Tangier. After getting her DUT diploma in "Finance, bank and insurance" from EST, Ecole Supérieure de Technologie, she left her hometown, Meknes. She discovered her passion and love for languages, and decided to pursue her studies in applied foreign languages in the capital of Morocco, Rabat. She graduated valedictorian of her class in 2018, and received the Excellence Award. Hajar currently lives in the white city, Tangier.